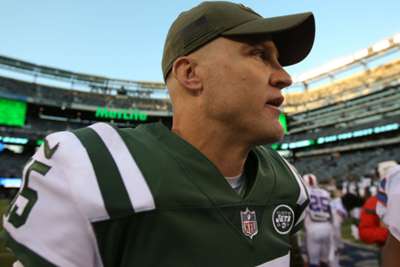 Doug Pederson believes Josh McCown will be an asset for the Philadelphia Eagles, even if he never steps on the field.

McCown came out of retirement at the age of 40 and signed a one-year deal with the Eagles after back-up quarterbacks Nate Sudfeld and Cody Kessler suffered injuries in NFL preseason.

Eagles head coach Pederson discussed the team's decision to add the 16-year veteran when he met with reporters on Sunday.

"It kind of falls in line with not only the injury situation, but also the fact that when we have an opportunity to add a little value, add a little depth, add a little competition to that spot, a veteran guy who has been around the league," Pederson said.

"I've said this all along, the quarterback position is not immune to any of this, so that's why we did it."

How did Josh McCown land in Philadelphia?

Get the latest on that and more in the 2019 debut of #Eagles 360 presented by @Xfinity.#FlyEaglesFly pic.twitter.com/dUwLnMhtIf

McCown spent the last two seasons with the New York Jets, appearing in 17 games and throwing 19 touchdown passes. He announced he was stepping away from football in mid-June but changed his mind when the Eagles became interested in signing him.

"I've been in a lot of situations throughout my career — where I was helping a young guy or serving as a stopgap kind of guy or being part of a rebuilding situation — so to come to a situation where it was more established, where they've got the quarterback [Carson Wentz] and a veteran defense and a lot of good players on the offense, that to me was enticing."

The Eagles have two preseason games remaining before they face the Washington Redskins in week one action on September 8.