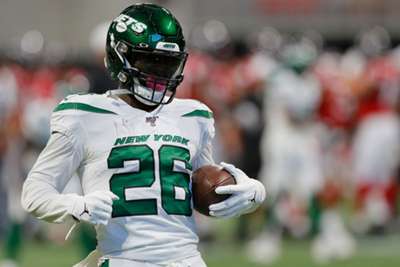 Le'Veon Bell will not be on the field until the games count for the New York Jets.

The Jets will hold the 27-year-old running back out for the entire preseason, coach Adam Gase told reporters after the team's Green and White scrimmage on Sunday.

"I was about 99 per cent sure heading into the season, it was all based off how he practised, conditioned, those types of things," Gase said.

"We talked about it before we started. I told him, 'We wanted to increase the reps last week', and we're going to do the same thing this week where we just get him as game-ready as possible because he's not really going to know until we get in a real game."

Bell missed all of 2018 after holding out from the Pittsburgh Steelers over a contract dispute. He then signed a four-year, $52.5million deal with the Jets this offseason.

"I feel like he's in great shape, he's been contacting about as good as anybody on the practice field. I feel confident that he'll be ready to go week one," Gase said.

"He's in a good place right now. The way he's working in practice, the way he's running the ball in practice, I feel really good about him when we hit the regular season."

Bell has rushed for 35 touchdowns and made three Pro Bowls since he was selected by Pittsburgh in the second round of the 2013 draft.

"I want to do whatever coach Gase wants me to do," Bell said after a practice last week, via the team's official website.

The Jets have two preseason games remaining before they host the Buffalo Bills on September 8.