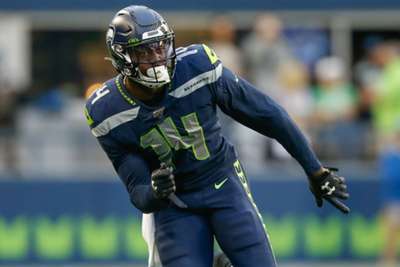 The Seattle Seahawks have announced D.K. Metcalf requires knee surgery, though head coach Pete Carroll is confident the setback will not "derail" the wide receiver for too long.

Selected in the second round of the 2019 draft, Metcalf was with the team for Sunday's preseason game against the Minnesota Vikings but did not play.

Carroll confirmed afterwards that the former Ole Miss standout will have an operation when the Seahawks return home, possibly as early as Tuesday.

However, it is hoped the 21-year-old may recover in time for the start of the regular season. Seattle open their campaign against the Cincinnati Bengals on September 8.

"DK's got an injury to his knee that we found; it happened two days back," Carroll told the team's official website.

"It's something we've got to do some work on, probably Tuesday, and get him back in a hurry. We're disappointed for him, because he was off to a fantastic start, but I don't think this is going to derail him for long.

"But he does have to have some work done. We'll know more about that when we get back into town.

"The docs really have a clear look at the MRI already, what it is, and it's a really quick recovery. That still all has to happen. We're going to keep him in town and get the work done right away, and be very optimistic about the way he can get back."

Carroll also offered an update on rookie safety Marquise Blair, who was carted off the field during the 25-19 loss to the Vikings.

"He had back spasms in the second half," Carroll said. "I don't know what that means, but he had a play and his back got tight, and it kept getting tighter and he couldn't go back."

Meanwhile, back-up quarterback Paxton Lynch will have to clear concussion protocol after taking a heavy hit from Vikings cornerback Holton Hill, who was ejected.