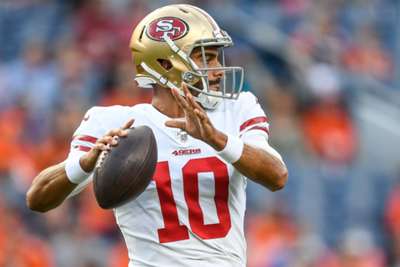 Jimmy Garoppolo's preseason return to action did not go exactly to plan.

The San Francisco 49ers quarterback played his first game back from his season-ending anterior cruciate ligament injury last September in Monday's 24-15 win over the Denver Broncos.

But Garoppolo failed to impress as he went one-for-six for zero yards and an interception, with a lousy 0.0 passer rating.

Garoppolo was replaced by CJ Beathard after three drives, but he was at least able to get his nerves out the way early.

"Obviously there was a lot of excitement," he said. "I was anxious to get out there and everything but nothing too crazy.

"It's something I haven't done in a year, obviously, so I got to knock the rust off and everything and thankfully we have a short week this week so we can bounce back quickly. But it's the first step of getting back into it.

"Obviously I'm a little frustrated but it's the NFL. Unfortunately, we don't get to play the whole game right now so I only get so many plays.

"You wish you could be out there for more so we could bounce back. But it is what it is. It's preseason right now, so we just have to take it in stride."

Although the outing was not pretty, Niners coach Kyle Shanahan believes the experience did Garoppolo good.

"He's had a year off football," the coach said. "And before that, he only played about eight games total. The more he can play, the better.

"I wish we could have kept him out there longer today but you risk everyone else, too, so I had to get those guys out of there."

Garoppolo, 27, was traded from the New England Patriots to San Francisco in 2017 and then signed a five-year contract worth $137million with the Niners last year before his early season injury.

San Francisco will visit the Kansas City Chiefs on Saturday before wrapping up their preseason at home next Thursday against the Los Angeles Chargers.