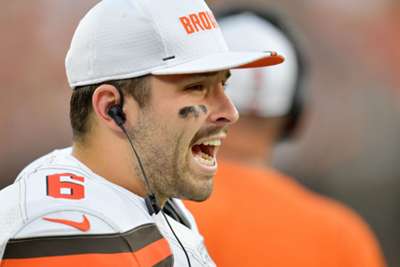 Mayfield, the starting quarterback at the Browns, suggested the Giants were "overthinking" when they selected Jones, who was projected much lower.

The Cleveland star was similarly a slightly surprising selection last year with the first pick, but he hinted at a clear difference between himself and Jones.

Mayfield came into the NFL with a winning reputation after Oklahoma went 34-6 in his three years as a starter, while Jones was 17-19 as a starter at Duke.

"I cannot believe the Giants took Daniel Jones," he told GQ. "[It] blows my mind.

"Some people overthink it. That's where people go wrong. They forget you've got to win.

"Pass & Run" - Watch Daniel Jones' top highlights from Duke before he hits the field tomorrow for the start of rookie minicamp. pic.twitter.com/2UqpfYZs2t

"Either you have a history of winning and being that guy for your team or you don't."

This is Mayfield's second run-in with the Giants this off-season.

Last month, Mayfield said of new Browns receiver Odell Beckham Jr, formerly of the Giants: "He's here to play in front of fans who actually care, who will actually show up to every game and pack the stadium and love him for who he is."