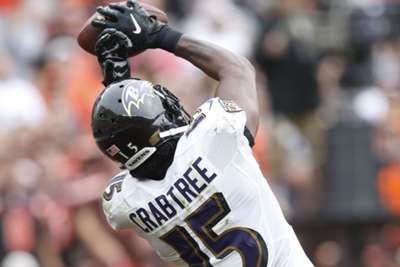 Arizona agreed to terms on a one-year deal with Crabtree, the team announced on Wednesday.

Crabtree, 31, caught 54 passes for 607 yards and three touchdowns in 16 games for the Baltimore Ravens last season. He was close to a deal with Arizona earlier this offseason but was unable to agree to terms at that point.

The wide receiver was originally selected by the San Francisco 49ers with the 10th overall pick in the 2009 NFL Draft. He played two seasons at Texas Tech, where he set a Division I freshman record with 134 receptions in 2007.

We have agreed to terms with WR Michael Crabtree on a one-year contract.

Kingsbury's offense has evolved in his time under Kevin Sumlin at Texas A&M, Dana Holgorsen at Houston and in his time leading Texas Tech from 2013-18, but he still runs many of the same schemes that Leach ran in Lubbock, Texas.

That could go a long way in the transition for Crabtree, who will only get the chance to play in two preseason games if he gets the opportunity at all.