This Week in US Sports: Astros injuries piling up, drama continues in Oakland and Dallas 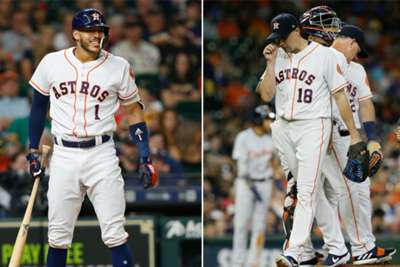 It is the dog days of summer in the United States which means two things — MLB teams are just trying to get to the playoffs healthy and unnecessary drama is being drummed up in the NFL.

This is the kind of week where there is serious news coming out but said news is hard to take seriously.

Do not know what we mean? Read what is going on this week in US Sports.

The Houston Astros have the best team in baseball on paper. They also are competing for the best team in MLB on the injured list. As of right now the New York Yankees undoubtedly hold that title with Luke Voit, Edwin Encarnacion, Giancarlo Stanton, Luis Severino and Dellin Betances all on the shelf, but Houston are doing their best to catch up.

Houston lost Carlos Correa (back), Aaron Sanchez (pectoral) and Ryan Pressly (knee) to the injured list this week. That is while they were also without Gerrit Cole for a start after he sustained a hamstring injury before his scheduled appearance against the Chicago White Sox last week.

Fortunately for the Astros, Cole starts against the Detroit Tigers on Thursday. Unfortunately, Houston are once again dealing with injury woes for 2012 number one pick Correa. The 24-year-old has now spent significant time on the injured list with thumb, back and rib issues over each of the last three years and his back injury completely derailed his 2018 season and is now threatening to do the same in 2019.

This is a concern for Houston not just this year, but in regard to the shortstop's long-term future.

2. Elliott, Jones getting in their feelings

Should Ezekiel Elliott be holding out right now? The answer is almost certainly yes. After leading the league in rushing two of his first three years in the NFL while accumulating more attempts than any other back in that span, the Dallas Cowboys picked up his fifth-year option in a means of avoiding paying him in the short term while racking up wear and tear for the long term.

With a running back's average NFL career being about two and a half years, yeah Elliott should want to get paid and he deserves it. But should he be getting offended when Jerry Jones jokes about him? Probably not. But he and his camp were apparently very ticked off when hearing Jones joke about Elliott after Saturday's game, referring to the back as "Zeke who?"

Now, Jones has always had Elliott's back. He fought tooth and nail to help Elliott avoid a suspension for an alleged domestic violence incident two years ago. He loves Elliott. However, he probably could have proved that better than how he reacted to hearing Elliott was annoyed at the joke he made.

Has he earned the right? Probably. Should he have shown his outrage in news conference to a reporter asking a legitimate question? Probably not.

For anyone watching Hard Knocks with the Oakland Raiders this year, it is easy to see what is going on. Antonio Brown loves attention and he is getting it. From a hot air balloon flight, to frostbitten feet, an obsession with Gatorade and multiple helmet issues, the cameras are constantly trained on Brown and will be until the show ends.

And while all of this is happening, we are getting a great glimpse into the constant drama around Brown. The wide receiver's helmet saga which featured him reportedly threatening to quit if he were not allowed to use his old helmet to general manager Mike Mayock telling reporters Brown is either in or out has been complete stupidity.

Brown is not going to quit over a helmet, but everyone is going to report on it for a couple of reason — one it is Brown, so it is news. And two, people love to watch car accidents, it is why traffic backs up every time a motorist is stuck on the side of the road after a collision.

This is sports in the US during August. Nothing is going on so more is made out of things than should be and Brown has been the absolute beneficiary.

The Cleveland Indians' trade of Trevor Bauer to the Cincinnati Reds at the deadline was made a lot more comfortable with the assumption that the former would be getting ace Corey Kluber back from a broken arm by the end of the season.

Well, that plan has hit a snag as Kluber suffered an oblique injury and has been shut down for two more weeks. While that does not sound so bad, let us tell you this, it is not just a two-week injury.

While he may be shut down for two weeks that just means he cannot throw in that time. So, when he does return, he has to ramp up his throwing again, face live hitters again and get his rhythm back on a mound hopefully in time for the postseason in October.

Kluber may be ready by then but there is a solid chance he could not be.