NFL news and notes: Elliott gets an offer, Cardinals and Eagles in rare trade 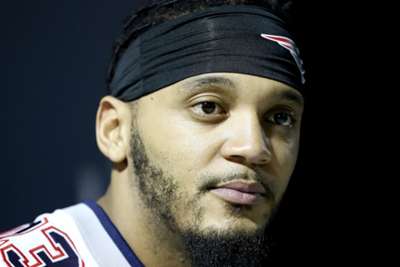 Multiple players have yet to report to their respective teams just two weeks before the NFL regular-season opener, but one could be nearing a resolution.

Meanwhile, another player may not be available for at least a few weeks, and maybe more, after getting into some legal trouble.

The New England Patriots safety was summoned by a New Hampshire grand jury on the charge, a Class B felony in the state that carries a fine of up to $2,000 and a potential prison term of up to seven years. Even if Patrick Chung is found not guilty of the charge, which stems from June, he will likely face discipline from the NFL for violating the league's personal conduct policy.

"We are aware of the reports regarding Patrick Chung. We will not be commenting while his judicial proceedings take place," a statement from the Patriots read.

Chung was absent from practice Wednesday ahead of Thursday's preseason meeting with the Carolina Panthers after previously wearing a red non-contact jersey throughout training camp as he recovers from offseason shoulder surgery.

He is scheduled to be arraigned August 28, one day before New England wrap up exhibition play against the New York Giants.

The question is: will he take it? The contract, rumoured to be worth more than Todd Gurley's but less than Le'Veon Bell's, would reportedly net Ezekiel Elliott between $13.135million and $14.375m per year with the Dallas Cowboys.

Elliott has remained a holdout throughout the preseason over his contract dispute and racked up more than $900,000 in fines for not reporting to training camp. He recently returned to Texas after training in Mexico, but the situation soured this week as Cowboys owner Jerry Jones joked about his absence.

We will see what Elliott's agent has to say about the proposal.

The Arizona Cardinals dealt safety Rudy Ford to the Philadelphia Eagles for defensive tackle Bruce Hector. Ford, a sixth-round pick out of Auburn in the 2017 draft, has played 23 games with Arizona over his first two seasons. Hector signed for Philadelphia as an undrafted free agent in 2018 before earning a spot on the team's practice squad. He played eight games as a rookie last season.

The move comes in the wake of the unexpected death of former wide receiver coach Darryl Drake earlier this month. Drake, who was 62, was in his second season with the Pittsburgh Steelers, and his passing took a toll on his players.

Sherman has not coached since he retired following the 2015 season, but the 67-year-old brings four decades of coaching experience at both the college and professional level to the table. He even served as offensive coordinator for the Steelers in 1998.

Detroit doubles down on Harrison

The Detroit Lions signed the defensive tackle to a one-year extension worth a reported $11m, which would bring Damon Harrison's guaranteed money to $12 million between 2019-20.

The All-Pro defender was traded from the Giants to the Lions midway through last season, bringing his total to 17 games played in 2018. He had 31 tackles with New York before adding 50 tackles and 3.5 sacks in 10 games for Detroit.

Ryan Shazier is getting ready to go back to school next week but found time to give an update on his spinal rehabilitation. He has progressed to box jumps!

"God's blessing me, I'm working my butt off, and I'm just doing my part." @RyanShazier is making tremendous strides in his recovery

Antonio Brown could not help but take a shot at his former fan base after a report claimed HBO's "Hard Knocks" ratings in Pittsburgh were triple the national average.