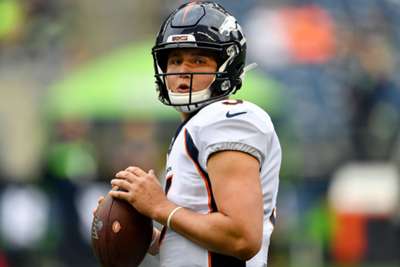 Drew Lock may not be returning to the field anytime soon.

The rookie quarterback, who is dealing with a hand injury, could start the season on the injured reserve, coach Vic Fangio told reporters Thursday. Lock will not play or practice for at least the rest of the preseason, Fangio said.

"Obviously because it's his throwing hand and a thumb, that's a pretty serious injury for a quarterback,'' Fangio said, via ESPN. "It will be some time before we know exactly where he's at and how much time he would miss.''

Lock badly sprained his thumb in the Broncos’ preseason loss to the 49ers last week. He remained in the game for one more play, throwing an incomplete pass, and was removed before the next series.

The Missouri product slipped to the second round of the 2019 draft, where the Broncos selected him with the No. 42 overall pick. He completed 31 of his 51 passes for 254 yards with a touchdown and an interception in three preseason appearances.

Lock was listed as Denver's third-string quarterback behind Joe Flacco and Kevin Hogan on the team's latest depth chart.

"I'm just trying to learn as much as I can, work, be a good teammate, all of those things you need to do as a (quarterback)," Lock said last week. "I’ve said this is a prime spot to be in, and it is. ... I have to concentrate on getting better."

The Broncos have two preseason games remaining before they face the Raiders in Oakland in Week 1 action Sept. 9.