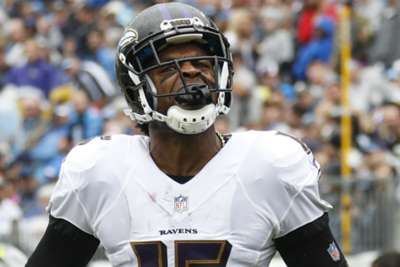 The Cardinals signed wide receiver Crabtree to a one-year deal, reportedly worth $5.5million on Wednesday.

First-year Cardinals coach Kingsbury discussed the team's decision to sign Crabtree – who swapped the Baltimore Ravens for Arizona – when he met with reporters on Thursday.

"I think he's been a very productive player in this league," Kingsbury said at his news conference. "Very savvy, mentally tough player, plays physical, brings a lot for our young receivers to learn from and be around.

"We're excited about him. ... Super competitive. Still has a real desire to play and play at a high level."

Coach Kingsbury discusses the new additions of Michael Crabtree and Bruce Hector, and the depth of the wide receiver group. pic.twitter.com/sF7g6CFm8U

Crabtree, spent last season with the Ravens, catching 54 passes for 607 yards and three touchdowns. He has also played for the San Francisco 49ers and Oakland Raiders during his 10-year career.

"We like what we've seen on tape," Kingsbury said. "[Cardinals general manager] Steve [Keim] feels really good about it, talking to other coaches and how he's continuing to get better and we think he comes in and provides depth right away. So, we're looking forward to getting him here and getting him out there."

Crabtree will be competing for the second spot on the Cardinals' depth chart behind veteran Larry Fitzgerald.

"I know he'll bring some value to our group," Fitzgerald said.

The Cardinals have two preseason games remaining before they host the Detroit Lions in week one action on September 8.