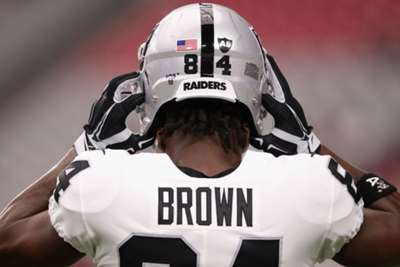 The Antonio Brown Era in Oakland is over before it even began, after the Raiders decided to release the wideout on Saturday.

Elite players rarely stay on the market for long and Brown's agent has made it clear his client is looking to explore his options.

ESPN's Adam Schefter quoted Brown's representative, Drew Rosenhaus, as saying: "Now that Antonio is a free agent, we are focused on the future and I will immediately work on signing him to a new team. Antonio is looking forward to a new beginning."

There is surely no way 30 teams - excluding the Pittsburgh Steelers, who traded Brown to Oakland following a fallout, and Raiders - could pass on a chance to land one of the NFL's best, right?

Here are three teams that should consider signing Antonio Brown.

Drew Rosenhaus: “Now that Antonio is a free agent, we are focused on the future and I will immediately work on signing him to a new team. Antonio is looking forward to a new beginning.”

New England are bound to pop up in plenty of people's heads. The Patriots have an elite coach in Bill Belichick, a tight-knit system and certainly are no strangers to taking risks. While last year's gamble that brought Josh Gordon over from the Cleveland Browns did not quite work out in 2018, the wideout made valuable contributions en route to the Patriots' latest Super Bowl win. Better yet, he will have a chance to redeem himself this year. The jury is still out on whether they made the right choice, so why not give it another go?

Brown, 31, is still at the peak of his career and has eclipsed 1,200 receiving yards in six consecutive seasons. He would certainly improve a receiving corps that already features Gordon, Demaryius Thomas and Julian Edelman.

If Brown wants to play for a winner, joining a team that's won three of the last five Super Bowls might not be a bad idea.

America's team already has plenty of drama surrounding it, so why not add more? Surely Jerry Jones has at least considered bringing Brown aboard.

Dallas has a dynamic running back in Ezekiel Elliott, a dangerous dual threat quarterback under center in Dak Prescott and received great production from Amari Cooper after acquiring the wideout in a midseason trade last year.

With Brown in the fold, the Cowboys would have an abundance of elite options. If there's one statement move Dallas could make to show it's dedicated to winning now, it's this.

Bengals owner Mike Brown has been changing Cincinnati's culture by taking chances on wayward players over the years. If Adam 'Pacman' Jones and Vontaze Burfict could carve out roles, Brown might be able to do the same.

But that is not the only reason this move could make sense.

A.J .Green has been at the heart of Cincinnati's offense for years but he is expected to miss the start of 2019 due to an ankle injury he suffered in practice this offseason. If Green misses the first half of the campaign, pairing him with Brown would allow him to ease back into things while demanding a little less attention every play.

Tyler Boyd had a breakout season in 2018 and John Ross has the breakaway speed to be a major downfield threat moving forward. Then there's tight end Tyler Eifert and running back Joe Mixon.

An explosive player like Brown that can open up the field might be just what Cincinnati needs to rebound from last year's 6-10 finish.