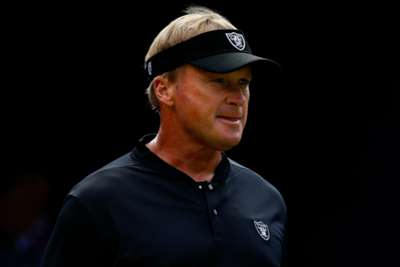 The Raiders released Brown on Saturday hours after he asked to be let go by the team without having played a single game.

Brown was reportedly facing a hefty fine following a verbal altercation with general manager Mike Mayock earlier in the week, with his guaranteed money said to be voided.

Gruden faced the media to explain the decision shortly after Oakland's announcement and said the franchise could not be faulted.

"It's disappointing," he told reporters. "I'm really proud of our players, our coaches, our owner, our front office. We did everything we could to make this work and I'm sorry it didn't.

"I apologise, but I will tell you I'm very proud of what we did as an organisation to try.

"I was very hopeful about what he could bring here, but unfortunately it's not going to happen. He is a good guy. He's misunderstood by a lot of people, but he's a good guy."

Gruden is now hoping to move on and focus on Monday's game against the Denver Broncos.

"I'm sorry that we never got the chance to see him in silver and black," he said. "I'm not going to sit here and talk about it all day.

"We've got 12 rookies. We've got a lot to be excited about and I wish Antonio the very best."