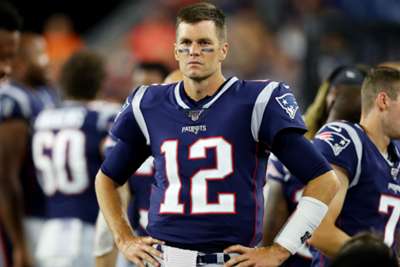 Finally, the wait is over. No more concerns about combine performances, training camp activities or injuries in meaningless pre-season fixtures.

On Thursday, the 2019 NFL season kicked off with the Chicago Bears against the Green Bay Packers. The long-time rivalry failed to deliver a thriller on opening night – the Packers prevailed 10-3 – but it did signal the start of Week 1.

Sundays will never be the same again (well, until the Super Bowl next February at least).

As the rest of the league wait to get started, we look at some of the key Opta facts for seven games in Week 1 - including the New England Patriots, the reigning champions no less, hosting the Pittsburgh Steelers.

The sun rises on our 100th season.

The Rams finished the last campaign as bridesmaids, beaten 13-3 by the Pats in Super Bowl LIII. So, can Sean McVay’s team go one better this season? Well, the schedule has thrown up a tricky start away to Carolina – the Rams have not triumphed in Charlotte since 2001.

However, while the head-to-head history favours the Panthers, the Rams have won 13 road games since the start of 2017 season, which is the most in the NFL in that span.

The Eagles have dominated this divisional rivalry of late, winning the last four straight. Their most recent meeting was in Week 17 last year, with the Redskins shut out in a 24-0 loss.

Philadelphia went 5-3 at home last season and will be wary of a Washington team who have won their last three road openers. However, the Redskins still have a long way to go to match the franchise record in such games, having triumphed in seven on the spin between 1937 and 1943.

Football is BACK #NFL100 pic.twitter.com/iVV6mpEWuz

The Vikings are on a three-game winning streak against the Falcons, while they have also not lost a home opener since 2014.

So no hope for Atlanta this week? Actually, the Falcons finished the last campaign with back-to-back road wins, plus their only other away success in 2018 came in Minnesota. They have done a good job keeping Adam Thielen quiet in previous meetings, too. The wide receiver has recorded just four catches in three games against them.

Kansas City have beaten Jacksonville in four straight games, including a 30-14 result last season. Still, the Jaguars managed 502 yards of offense (and had five turnovers) in a losing cause.

The Jags will be hoping to do better at home in 2019. They went 3-5 in front of their own fans last season, one of just eight teams to post a losing record at their own stadium. They conceded the fewest and scored the second-fewest points at home in 2018, so reigning MVP Patrick Mahomes and the Chiefs may find it tough going this weekend.

The Colts begin life without the now-retired Andrew Luck in LA. They closed out the previous season with successive road wins but have not won three in a row away from Indianapolis since a four-game run between October and December in 2016.

As for the Chargers, quarterback Philip Rivers has just three touchdowns in five regular-season games against the Colts. He has thrown for fewer against just one NFL team (Atlanta - one in three games).

The Steelers' 17-10 win last season was their first success in five over the Patriots. They have become accustomed to starting on the road, having done so for the past four seasons.

Tom Brady has certainly enjoyed coming up against Pittsburgh in the past, though. In his 11 regular season games against them, the quarterback has thrown for 26 touchdowns (his second most against a team outside of the AFC East) compared to just five interceptions.

These two teams have not faced each other since 2015, the Texans winning 24-6 the last time they met. The Saints have not scored six or fewer points in a game since, by the way.

New Orleans have home advantage but will be looking to end a miserable Week 1 record. They have lost their last five season openers, allowing an average of 36.0 points per game.