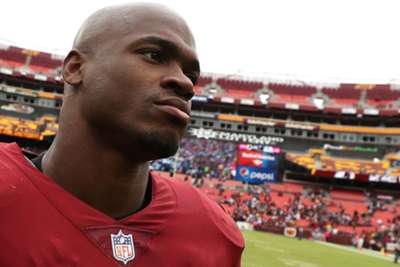 Adrian Peterson, who led the Washington Redskins in rushing last season, is among the team's list of inactive players for the Week 1 game against the Philadelphia Eagles.

The move came as a surprise despite head coach Jay Gruden already naming Derrius Guice as Washington's starting running back for the season opener.

The former LSU back - a second-round pick by the franchise in the 2018 draft - missed his entire rookie campaign after suffering a serious knee injury.

"We feel like (Guice) can be a first, second and even a third down back," Gruden told reporters ahead of the trip to Philadelphia. "I think the offense, carries wise, will probably go through him, pretty much."

Still, it was expected Peterson would still get some touches coming off the bench.

He was rewarded in March with a new contract, the seven-time Pro Bowler handed a two-year deal worth $8million.

However, Chris Thompson and Wendell Smallwood will back up Guice for the clash with the Eagles.