Antonio Brown to the Patriots: Moss, Ochocinco and Belichick´s other gambles in New England 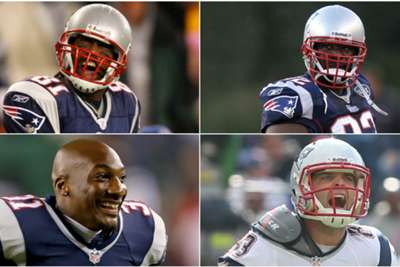 Antonio Brown is the latest player Bill Belichick and the New England Patriots have taken a punt on.

Seven-time Pro Bowler Brown is certainly not a risk when it comes to production but his acrimonious exits from Pittsburgh and Oakland means Belichick is rolling the dice again on a free agent with character concerns.

More often than no, though, Belichick gets it right - he has six Super Bowl rings as the Pats' head coach and de facto general manager after all.

Here we take a look at Belichick's personnel gambles to see which were hits and which were misses.

Harrison was one of the most-fined players in NFL history when with the San Diego Chargers following a series of illegal hits, but New England took a chance in 2003 and reaped the rewards.

Bitter at chargers for what ? They did me a favor pic.twitter.com/z7ePigv0mj

Running back Dillon was approaching 30 and coming off the first down year of his career when the Patriots parted with a second-round pick to bring him to Foxborough.

Having made no secret of his desire to play elsewhere, Dillon proved his 2003 season was a mere blip, rushing for 37 scores and winning a Super Bowl during his three years with Belichick.

There were no character concerns over Welker, yet New England's decision to part with second and seventh-round picks appeared bold given the undrafted receiver had tallied just 1,121 yards and one touchdown in three seasons in the league.

Belichick saw the potential, though, and Welker caught more passes than any player in the league in his six seasons with the Patriots, while he was also named to the Pro Bowl in each of those half-a-dozen campaigns.

Acquiring a disgruntled but extremely talented receiver from the Raiders? New England have been here before.

In 2007, New England traded for Moss, who had courted controversy in Minnesota and then outstayed his welcome in Oakland, and he proved to be the final piece of the jigsaw for one of the greatest offenses ever.

He brought in 23 touchdowns in his first year (a figure that remains a single-season record) as the 16-0 Pats went to the Super Bowl only to be beaten by the New York Giants. Moss led the league in receiving scores again in 2009 (finishing in a tie with Vernon Davis and Larry Fitzgerald on 13) before he was sent back to Minnesota - with Belichick again judging when the time was right to move on from the future Hall of Famer.

Two years after signing a seven-year, $100million deal with the Washington Redskins, defensive lineman Haynesworth was traded to New England for a fifth-round pick having failed to make an impression in the capital amid concerns over his attitude and fitness.

His time in Boston was also short-lived, though, with Haynesworth waived less than four months after signing having clashed with assistant Pepper Johnson. He would play just seven more games in the NFL.

One of the NFL's biggest characters hardly seemed suited to 'The Patriot Way'. Wide-out Ochocinco, formerly Johnson until he changed his name to correspond with his jersey number - a move he later reversed, was brash - once wearing a jacket that suggested he was a future Hall of Famer - but productive, with seven 1,000-yard seasons in his 10 years in the league.

“You could put @ochocinco in a phone booth with a couple of DBs, & he’d pick up the phone and be 'Hey, like I’m open'.” #AFootballLife pic.twitter.com/tUvNSCMoVZ

Ochocinco joined New England on the same day as Haynesworth in 2011 and cost the Patriots two draft picks. However, he lasted only one season, making 15 catches for 276 yards and one touchdown in what proved to be his final NFL stop.

A former first-round pick, Talib was considered surplus to requirements in Tampa Bay after his time with the Buccaneers was blighted by off-field issues.

The cornerback's New England debut was delayed by a suspension for violating the league's policy on performance enhancing substances, but Talib made his first Pro Bowl in 2013 before leaving for Denver - where he won a Super Bowl ring - in free agency.

Gordon and Brown will be in the same offense in 2019, having led the NFL in receiving yards in 2013 and 2014 respectively.

There were red flags against Gordon coming out of college after he failed a drugs test and was kicked off Baylor's team.

He has continued to be troubled by his demons and has served multiple suspensions in the NFL, including one last season, but is now back with New England and will surely be a hit if he plays enough games.