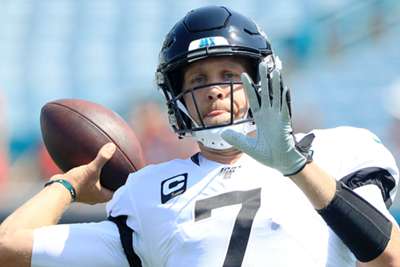 Nick Foles was injured on his starting debut for the Jacksonville Jaguars after he threw a touchdown in the first quarter of the game.

Foles was taken back to the locker room and quickly ruled out for the remainder of the game with a left shoulder injury, the team announced.

Before the injury, the 30-year-old had completed 5-of-8 passes for 75 yards and one touchdown.

QB Nick Foles has been ruled out with a left shoulder injury. pic.twitter.com/ChOxvmBOJR

Foles was hit by Kansas City Chiefs defensive tackle Chris Jones during a 36-yard touchdown pass to wide receiver DJ Chark Jr. The Jaguars medical staff tended to him and took him to the locker room. Minutes later he was ruled out for the game.

FOLES JUST DROPPED IT RIGHT IN THE BUCKET pic.twitter.com/A4YKGAwnCg

This past offseason he signed a four-year, $88 million deal with Jacksonville.