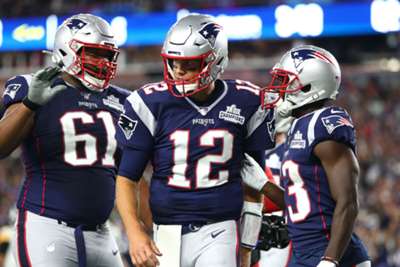 Tom Brady and the New England Patriots handed the Pittsburgh Steelers an embarrassing 33-3 loss in the NFL on Sunday.

Brady threw for 341 yards and three touchdowns on 24-of-36 passing while Ben Roethlisberger could not get anything going for Pittsburgh.

The win showed how dangerous New England can be, even without their newest star. On the other hand, the loss exposed what can happen when teams lose their biggest names.

Three takeaways from the Patriots' dominant win over the Steelers

It was all Patriots, all night

For anyone expecting a high scoring affair on both sides, they were disappointed. It was all Patriots, all night as they built a 20-0 lead at half-time and later extended it to a 30-point victory.

Brady once again escaped the clutches of Father Time and the Steelers' defense all at once.

"We made some big plays on the pass game which always helps," Brady told the NBC broadcast after the game.

Brady's passes included a 58-yard touchdown to Phillip Dorsett and a 42-yarder to Josh Gordon.

.@Dorsett_4 takes the top off the defense on the launch from @TomBrady!

TB12 just showing off his arm

Brady was so effective, he joined elite company. He now has 88 career 300-plus-yard passing games for the third most of all-time behind only Peyton Manning (93) and Drew Brees (115).

The Steelers' offense struggled with their veteran leading new stars

Pittsburgh lost some of their biggest names in the offseason with Antonio Brown and Le'Veon Bell both leaving. The Steelers hoped for a younger core of players to step up in wide receiver JuJu Smith-Schuster and running back James Conner led by the veteran quarterback Roethlisberger.

But Big Ben was big bad and neither the pass or run ever got going. Even in the red zone, Roethlisberger could not get the Steelers a touchdown. At the start of the third quarter, Pittsburgh had to opt for a field goal after coming up short at the Patriots' one-yard line.

Roethlisberger finished 27-of-47 passing for 276 yards with one interception. Smith-Schuster led all receivers with six receptions for 78 yards and Conner had 21 yards on 10 carries.

The Patriots offense could be even more dangerous, starting next week

Do the Patriots even need Brown? Certainly not, but they will be an even more dangerous team with the seven-time Pro Bowl player.

Brown, who joined New England just hours after getting released by the Oakland Raiders to end a training-camp long saga, was not eligible to play on Sunday but is "excited to get to work" and that will certainly be exciting to watch.

"We're excited to have him," Brady said after the game.

New England had their eyes on Brown when he first expressed his desire to leave Pittsburgh, but the Steelers did not want to trade him to AFC rivals.

But in the end, per usual, the Patriots won.