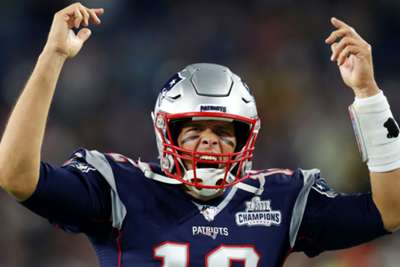 Tom Brady is "excited" about the impending addition of Antonio Brown to the New England Patriots but acknowledged the need for hard work to get the wide receiver "up to speed" as quickly as possible.

Brown confirmed on Saturday he is set to sign with the Pats, though the reigning Super Bowl champions are yet to confirm the deal, reportedly for one year and worth $15million.

Still, despite his absence, the seven-time Pro Bowler was the major talking point when his future employers faced one of his former teams, the Pittsburgh Steelers, on Sunday.

Brady threw two touchdown passes to Phillip Dorsett and another to Josh Gordon in a 33-3 win, yet the quarterback was understandably asked about the wideout not yet officially on the roster in his post-game news conference.

"Everybody is excited to add great players - it helps everybody win," the 42-year-old said when questioned about Brown joining the team. "You have great players who are sharing the burden of a tough football season.

"I think, like anything else, whether it was Josh last year, or Phillip when he got here a few years ago late, or Antonio, [it is about] how much can you learn and process.

"We are all going to work hard to try and get up to speed as fast as possible, but we haven't had a training camp together or anything like that, so you've got to force a lot of information.

"We are all excited to have him and all I can say is we're going to work as hard as we possibly can to get up to speed as quickly as possible."

Brown's time in Pittsburgh ended acrimoniously, while he was cut by the Oakland Raiders - who ran out of patience with a player they only traded for in March - on Saturday.

Patriots head coach Bill Belichick refused to talk about the 31-year-old after the opening win over the Steelers, simply replying to a question: "I'll talk about the game and the players that are on our team."

Asked by a different reporter later in the media session if he had any comment on Brown, he cut into the question with a "no".

Belichick was more forthcoming about his team's performance, however.

"I thought our guys did a great job this week preparing for a really good Pittsburgh team. We just played well across the board - on offense, defense and special teams - and just made plays in all three phases of the game," he said.

"We got field position out of the kicking game, moved the ball on offense and held them to three points on defense, so give the players the credit. They were ready to go and we will turn a page here and move on to Miami."