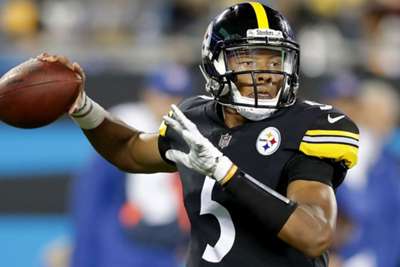 The Jacksonville Jaguars wasted no time in addressing their quarterback situation, acquiring Joshua Dobbs from the Pittsburgh Steelers on Monday.

Pittsburgh will receive a 2020 fifth-round draft pick from Jacksonville, as confirmed in statements from both teams.

The move follows a major blow for the Jaguars on Sunday, when new starting quarterback Nick Foles suffered a broken left collarbone early in the 40-26 home loss to the Kansas City Chiefs.

Jacksonville confirmed Foles was scheduled to undergo surgery on Monday and is expected to be placed on the injured reserve/return list, per multiple reports.

That would mean the former Super Bowl MVP would miss the first half of the 2019 season.

Dobbs will compete for playing time with rookie Gardner Minshew, who looked sharp in relief of Foles against the Chiefs.

A sixth-round pick out of Washington State this year, Minshew completed 22 of 25 attempts for 275 yards, with two touchdowns and one interception.

Dobbs – a fourth-round selection in 2017 - played in five games last season, completing half of his 12 passes and tossing an interception. He has been the Steelers' third-string quarterback, behind Ben Roethlisberger and Mason Rudolph.

Foles, who signed a four-year, $88million deal with the Jags, was hit by Chiefs defensive tackle Chris Jones during a 36-yard touchdown pass to wide receiver DJ Chark in the first quarter.

The Jaguars medical staff attended to Foles and took him to the locker room, but he was ruled out for the game just minutes later, finishing the day having completed five of eight passes for 75 yards and one touchdown.

"It's unfortunate, but at the same time I'm trusting the good Lord. I was really proud of [Minshew] for stepping up and I'm going to be here to help him anyway possible."