NFL news and notes: Jaguars trade for new QB with Foles out, Funchess headed to IR 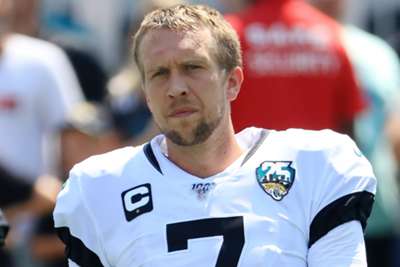 There is a lot to take in after the first full slate of games to start the 2019 NFL season, and we still have two matchups left on Monday.

Will injuries continue to dominate the headlines, or will Antonio Brown bubble back up to further spoil the Oakland Raiders' season opener?

It is a temporary solution since coach Doug Marrone told reporters he expects Nick Foles to return later this season. The veteran Jacksonville Jaguars quarterback suffered a broken left collarbone in the first quarter against the Kansas City Chiefs and underwent surgery on Monday, so he is not expected back until November.

In the meantime, Josh Dobbs will compete for playing time with Gardner Minshew, who was sharp as he filled in for Foles in the opener. The 2019 sixth-round pick completed 22 of 25 attempts for 275 yards with two touchdowns and one interception.

Washington Redskins head coach Jay Gruden confirmed the running back suffered a right knee injury on Sunday and is in jeopardy of missing time. However, the team will await the results of his Monday MRI exam before determining his availability for week two against the Dallas Cowboys.

Should Derrius Guice be sidelined, Adrian Peterson could see an increase in his workload. The 13-year veteran, who was a healthy scratch Sunday, led the Redskins in rushing last season after Guice missed his rookie year with the torn anterior cruciate ligament.

As if Andrew Luck's retirement was not difficult enough to overcome, the Indianapolis Colts now have to deal with the receiver's absence for the next few weeks after he suffered a broken collarbone in Sunday's overtime loss to the Los Angeles Chargers. Devin Funchess, who signed a one-year deal with Indianapolis as a free agent this offseason, had three catches for 32 yards before exiting.

Colts coach Frank Reich confirmed Funchess underwent surgery and will go on injured reserve but left the door open for his return down the road this season.

Jack unlikely to be suspended for stirring the pot

The Jaguars linebacker scuffled with Chiefs receivers Sammy Watkins and Demarcus Robinson midway through the second quarter of Sunday's chippy game and was ejected. Myles Jack complicated things further by needing to be escorted off the field by coaches after learning he had been tossed.

While Jack blamed Watkins for instigating the incident, he took responsibility for his actions after the game.

"It's a crazy and physical sport that we play and I just felt like that play was not a football play," Jack told reporters. "Looking back it was an idiotic move for me to do that because you do not get points for that. I’m a captain now and the team just extended me so I have to do better for me and my team."

While there is no NFL rule against jewellery, the Cleveland Browns receiver did violate a rule prohibiting hard objects on the field. Fortunately for Odell Beckham Jr, the league will reportedly address the infraction with him and the team, though it is unlikely to escalate beyond that.

The decision for Beckham to play a contact sport with nearly half a million dollars on his wrist is a bold flex, but a questionable one.

Tom Brady is feeling good about 2019, and why shouldn't he? The New England Patriots started the season with a win over AFC rivals the Pittsburgh Steelers just hours after reportedly acquiring former Pittsburgh standout Antonio Brown following his release from Oakland.

Two kick-offs remain in week one, but it is already week two in Carolina.