Kitchens promises Browns ´will get better´ against Jets 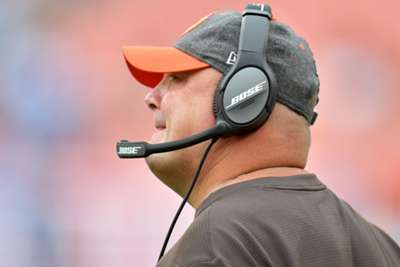 Cleveland Browns head coach Freddie Kitchens said the team will "get better next week" after their 43-13 rout at the hands of the Tennessee Titans.

The Browns entered the NFL seasons with high expectations following the arrival of star Odell Beckham Jr but they were humbled by the Titans in week one.

Kitchens fronted the media on Monday and insisted the Browns are focused on improving their discipline after committing a staggering 18 penalties in the loss as they prepare to face the New York Jets.

"What we have to refrain from doing right now is overreacting. It is one game in a 16-game schedule," Kitchens said. "We are going to continue to make corrections in how we prepare from a discipline standpoint and a lack of composure standpoint.

"I think that put us in some bad situations that we were not able to overcome enough of those situations, put us behind in the game and ultimately out of reach because of those things. We will get better next week and we will see where we are at."

Browns quarterback Baker Mayfield completed 25 of his 38 passes for 285 yards with a touchdown against Tennessee, but he threw three interceptions and was sacked five times.

Kitchens said he was confident Browns star Mayfield will bounce back.

"I have to do a better job of putting those guys in better situations from that standpoint. That falls on me more than anything else."