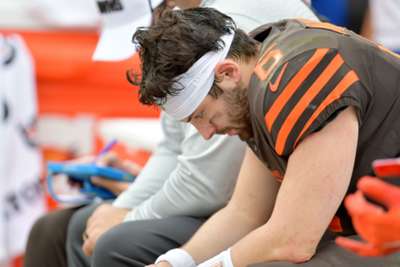 The NFL is back, and there was plenty of action Sunday as fans took in the first full slate of the season.

Injuries, however, were also aplenty and much of the focus this week will be centred on how those players' absences will affect their respective teams.

Here we look back at the biggest headlines from Week 1 and the impact they will have heading into Week 2.

The veteran quarterback broke his left collarbone early in the first quarter against the Kansas City Chiefs on Sunday and underwent surgery on Monday morning. Green Bay Packers quarterback Aaron Rodgers was sidelined for eight weeks when he broke his right clavicle in October 2017, so a similar timetable could be expected for Nick Foles.

In the meantime, the team wasted no time in addressing their quarterback situation and acquired Joshua Dobbs from the Pittsburgh Steelers. The Jaguars also have rookie quarterback and 2019 sixth-round pick Gardner Minshew, who filled in for Foles on Sunday.

Browns a bust in sloppy start

The overhauled Cleveland Browns proved to be overhyped as they dropped their 15th straight regular-season opener in a 43-13 thrashing by the Tennessee Titans. But is there reason to panic? It could be too early to tell since there is time for Cleveland to correct the mistakes they made.

Cleveland committed 18 penalties for 182 yards, which is their most infractions in a game since 1951 and the most for any team in a season opener since the NFL-AFL merger. The Browns gave up 21 points in the fourth quarter alone, and it did not help that tackle Greg Robinson was ejected for kicking Titans safety Kenny Vaccaro and quarterback Baker Mayfield left the stadium with his hand wrapped.

The Baltimore Ravens ravaged the Miami Dolphins en route to a 59-10 victory, and the second-year quarterback was at the centre of it all. Baltimore had been adamant that Lamar Jackson would throw more this season, and he did just that as he limited himself to three carries for six yards and completed 17 of 20 passes for 324 yards and five touchdowns — all in just three quarters.

It is too early to tell if he will take home the award, but it is not out of the question if he can stay healthy. Jackson certainly will be an interesting player to follow not just all week, but all season.

Bet on Prescott being Dallas' next extension

The Dallas Cowboys cruised to a 35-17 win over the New York Giants after Ezekiel Elliott ended his holdout, but the quarterback carried the bulk of the workload as he completed 25 of 32 passes for 405 yards and four touchdowns. He also posted the first perfect passer rating (158.3) in franchise history.

Dak Prescott has shied away from discussing his own contract situation, but may not have to wait much longer after Cowboys owner Jerry Jones hinted a deal was "imminent" while speaking to reporters following the game. The question is: how much do they have left after extending Elliott, La'el Collins and Jaylon Smith? Because Prescott's price is only rising.

The New England Patriots confirmed the arrival of Antonio Brown following his release from the Oakland Raiders. But how will the outspoken receiver adapt to the "Patriot Way" under coach Bill Belichick's regime?

After the wild year Brown's had, we have our popcorn ready.