Rice says Brown planned Patriots move: We all got played 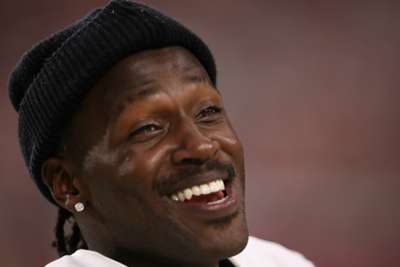 Antonio Brown always planned to join the New England Patriots according to Jerry Rice, who said the star receiver "played" the Oakland Raiders.

On the day he should have been making his Raiders debut, Brown completed a move to NFL Super Bowl champions the Patriots on Monday.

Brown – who was traded to the Raiders from the Pittsburgh Steelers at the end of the 2018 campaign – endured a tumultuous preseason before he was granted a release by Oakland.

As Brown prepares to link up with Patriots superstar Tom Brady and head coach Bill Belichick, Rice hit out at the seven-time Pro Bowler.

"I'm gonna be honest with you, because, this guy, he contacted me and he told me that he wanted to play ball here in the Bay Area. He wanted to be part of the San Francisco 49ers.

"So, I bought into it because I can only take a man at his word and stuff like that. But I think this, it was pretty much already planned. He had to take a different direction."

"So he had to go a different route. And he decided to come through the Bay Area. And I feel sorry for the fans over in Oakland.

"He was a Denzel Washington and he won the Oscar. He won an Oscar, guys. I'm gonna be honest with you."

Brown's agent Drew Rosenhaus, however, denied rumours the 31-year-old forced his way out of the Raiders just to join the Patriots.

Asked why anyone should believe that the fix was not in for Brown and the Patriots, Rosenhaus told ESPN: "Because it's the truth. I mean, what else can I say except it's a thousand percent the truth? There was no fix.

"We did try to make it work with the Raiders, really. But for a letter that we received from the Raiders warning Antonio that his contract would be voided, he would be playing tonight for the Oakland Raiders. That's the unfortunate thing."

"You know, the Raiders protected themselves and that set Antonio off. There's no question that there were some bumps in the road that fractured the relationship with the Raiders. But even as recently as Friday, it looked like he was going to be in a position to play Monday night with the team," Rosenhaus said.

"He apologised to the team, we were trying to make it work, [but] the club wanted to protect themselves on the contract, on the $30million in guarantees. And unfortunately, Antonio wasn't comfortable with that. He wanted out as a result. And that led to New England."