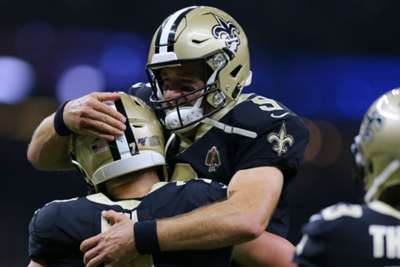 The Saints were hoping to put last season behind them, and a second-half comeback helped them do just that against the Texans.

In their first game back at Mercedes-Benz Superdome after the now-famous no-call in the 2018 NFC Championship game, there were still reminders of that day. The most notable came from the stands as fans sported referee uniforms.

The contest – the first of a doubleheader to kick-off 'Monday Night Football' – started off as another disappointment. But Saints quarterback Drew Brees stayed the course and led the Saints to a stunning win.

There were sparks of Deshaun Watson's greatness when Houston's offense had the ball, and a number of injury scares to the injury-prone signal-caller, but the young QB could not outdo the veteran, who led New Orleans down the field in the final seconds to set up the game-winning field goal.

Here are three takeaways from the Saints' stunning last-second win over the Texans:

The Texans' 2018 woes continued to hurt them this season. Watson, who has notoriously lacked protection since joining the league in 2017, continued to take hit after hit and had two injury scares in the first half.

Watson was brought down six times to start the 2019 season.

What is more? Two of those sacks were allowed by Laremy Tunsil, who Houston acquired from the Miami Dolphins solely to bring more protection to Watson's blindside. One of the two sacks came on a crucial third down.

The Texans' offensive line will need to provide Watson with a lot more help than they did Monday.

Brees used his experience in the second half

The Saints desperately needed to make half-time adjustments. Brees threw only his second interception in the red zone since 2017 in his second drive. Meanwhile, the Texans took risks just outside the red zone to take an early lead.

New Orleans put up three points in the second quarter and for the first time since 2011 were held scoreless in the first quarter.

But leave it up to a veteran like Brees to come out of the break in stride. He opened the third quarter with an 83-yard scoring drive, thanks in part to a massive touchdown run from Latavius Murray, and then led the offense into the end zone on the ensuing drive, finding, ironically, quarterback Taysom Hill for the touchdown.

...and for your next #Saints QB challenge @drewbrees  @T_Hill4 for the score pic.twitter.com/rISNqfphlk

The Saints also utilised running back Alvin Kamara better in the final two quarters. He finished with 97 yards on 13 carries.

Brees was not the only one to make half-time adjustments. The ESPN broadcast took flak on social media for the colour display of the down and distance graphic, which appeared bright yellow on the screen, resembling a penalty flag alert. After numerous complaints, producers changed the marker to a more neutral colour.

Saints' defense came up big, Texans' did not

Both sides needed a big play from their respective defensive units. The Saints had to stop Watson's big arm and the Texans had yet to see a big night from a healthy J.J. Watt. However, just one of those things happened.

Watt was quiet for most of the night while New Orleans' secondary made a lot of noise on one particular play.

In the final minutes of the third quarter, third-year safety Marcus Williams intercepted a deep pass intended for Will Fuller. The play, almost overshadowed by a WWE-esque tackle from DeAndre Hopkins, set up the go-ahead touchdown. It was a quick four-play scoring drive.

The interception energised the Saints' defense, which held Watson and company to just seven points after that play.

New Orleans' special teams nearly lost the game in the closing moments after a penalty was called on a missed extra-point attempt by Houston. Luckily, Brees and kicker Lutz saved the day.