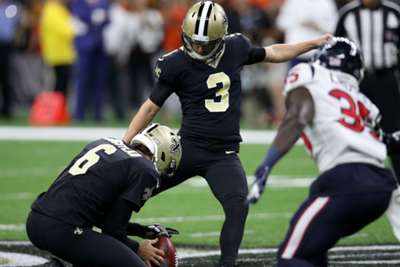 The Saints came away with a dramatic 30-28 win over the Texans after Lutz drilled a 58-yard field goal as time expired on Monday.

Saints quarterback Brees was asked about what he was thinking in the game's final moments during a news conference shortly after the kick.

"I was very confident," Brees said. "Just a ton of confidence. For all of us, just to get back into that situation, where we had a chance to win the game, I think we all felt like it was going to happen.

"The minute you heard that ball go off his foot, it was a thundering kick, I think we all knew it was going through the uprights."

Very confident in him

it was a thundering kick

we all knew it was going through the uprights! #Saints #MNF pic.twitter.com/Ik5Y4a858N

New Orleans trailed by a point after Houston scored a touchdown with a little less than 40 seconds remaining.

Brees, however, completed three passes on the final drive to move the Saints to the Texans' 40-yard line, which set up Lutz's winner.

"That's what this game is all about, in my opinion," Lutz told reporters. "Not everything is going to go your way. Some things aren't going to go as smoothly as you hope.

"There's going to be ebbs and flows over a football game that you've got to rely on each other to come out of it. I think that shows the resilience of this team.

"We've done that in the past and tonight we were able to do that again. ... Making a kick like that, that's got to be a top-1 moment for me."

Brees completed 32 of his 43 passes for 370 yards with two touchdowns and an interception in the win.