Jon Gruden on Antonio Brown saga: I feel like somebody was smashing my temple on the side of the hea 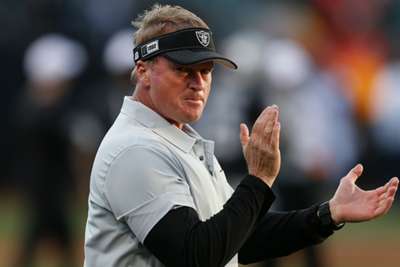 Jon Gruden is ready to move on from the Antonio Brown saga in Oakland and wished the New England Patriots good luck with their new wide receiver.

Brown's tumultuous spell with the Raiders came to an end on Saturday when he got his wish to be released by the franchise before ever playing a game for them.

It did not take the seven-time Pro Bowler long to find a new team, though. Brown confirmed on social media he would be signing with the Pats, though the reigning Super Bowl champions could not confirm the deal until Monday.

His former team were in action on the same day, Oakland starting their season with a 24-16 win over the Denver Broncos.

Unsurprisingly, Gruden was asked about Brown during his post-match news conference, with the Raiders head coach insisting he held no hard feeling towards the 31-year-old after giving it a "shot" during what turned out to be a turbulent preseason.

"I feel like somebody was smashing my temple on the side of the head," he told the media.

"We gave it a shot. Now New England gets their turn. Good luck to them. I just can't deal with it anymore."

Knock on wood if you’re with me (via @thecheckdown) pic.twitter.com/IOd54bkbEj

Having arrived via a trade with the Pittsburgh Steelers in March, Brown suffered a cryotherapy-related injury, filed grievances against the NFL to be allowed to wear his favoured helmet and also reportedly fell out with Raiders general manager Mike Mayock.

"What happened here the last couple of days may have been big news to some, but there were no distractions. You could tell that tonight - our team was ready to roll," Gruden said.

"I'm never going to bring it up again. That incident, or whatever you want to call it, had nothing to do with our team's focus or preparation. That's it - end of story."

Tyrell Williams - who also joined the Raiders in the offseason - caught a touchdown pass from quarterback Derek Carr against the Broncos, while rookie running back Josh Jacobs also ran for a pair of scores in the impressive Week 1 victory.

"I'm really happy for Tyrell Williams. Our receiving corp took a hit, obviously, this week. But Tyrell is capable of being a number one guy for us," Gruden said.