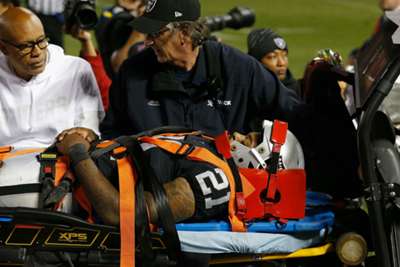 The first week of the 2019 season officially came to an end on Monday as the New Orleans Saints and Oakland Raiders closed out the opening slate with wins.

Meanwhile, the ripple effect of Antonio Brown's move to the New England Patriots has extended down to New York.

In the wake of the receiver's signing after his requested release from the Raiders, the Patriots reportedly traded fellow wideout Demaryius Thomas to the New York Jets for a 2021 sixth-round pick. Luckily for Thomas, who sat out Sunday as he continues to recover from a torn Achilles suffered last year, he has experience with head coach Adam Gase after the two worked together in Denver.

As for Brown, coach Bill Belichick could not confirm his status for Week 2 against the Miami Dolphins just yet.

Jackson could miss rest of season

The Philadelphia Eagles locked up the Pro Bowl defender on a three-year deal worth $30million this offseason following the departures of Chris Long and Michael Bennett, so his loss is a tough blow.

Malik Jackson had to be carted off the field on Sunday and was later seen leaving the stadium in a boot. He is reportedly scheduled to have surgery next week, so a more definitive recovery timeline should be determined after the procedure. In the meantime, Philadelphia may need to consider some replacements.

The Jets defensive tackle revealed he is set to miss six games for two separate violations of the performance-enhancing drug policy, though Nathan Shepherd made it clear he did not consume the banned substances for performance purposes.

"The only competitive advantage I was really looking for was being able to come to camp healthy and having an opportunity to compete," Shepherd told NFL Media.

"All that was going on, I was coming off a subpar season and a new coaching staff, new playbook, new everything. In my mindset, I didn't feel very confident with how everything had gone thus far. In my mind, I was so prepared to come into this offseason and have a successful offseason and train very hard. I felt that because of these limitations, I wasn't going to be able to do that. I made a rash decision, an unwise decision and a selfish decision to look to certain PEDs in order to help me with that recovery process so I would be ready to go."

The Cleveland Browns receiver could not fathom what all the fuss was about and said he will continue wearing his jewellery like he does every day.

"I'm here to play football," Odell Beckham Jr told reporters. "I would love for them to talk about football and what I do on the field, if I messed up on the field or if I didn't do well on the field, talk about my performance. Don't talk about any extracurricular, that's just it. If anybody else would've worn the watch, or if it was a $20 watch, it wouldn't have been no problem."

It was reported that Beckham violated a rule prohibiting hard objects on the field, but his Richard Mille watch — which is worth $189,000, not $350,000 — is plastic.

The move is ironic considering the Houston Texans gave up six sacks in their season-opening loss to the Saints on Monday. Houston also allowed quarterback Deshaun Watson to be sacked a league-high 62 times in 2018.

Still, fourth-year center Nick Martin has only allowed four sacks since Houston took him in the second round of the 2016 draft. Not bad considering he missed his rookie season with an ankle injury, which is likely why he is now among the highest-paid players at his position.

It is a new season, but the same traditions for Saints defensive end Cameron Jordan after he played his ninth opener for New Orleans.

Raiders cornerback Gareon Conley tweeted that he is going to be fine after being stretchered off the field on Monday. Raiders coach Jon Gruden even said "there's a chance" Conley could play in Week 2, though his status has yet to officially be determined.

Thank you to everybody who had me in their thoughts and prayers.. I hurt my neck nothing severe and it was just protocol to get me on a stretcher and get imaging to make sure everything was ok make sure it didn’t go down my spine or anything.. I’m good to go God Bless you all