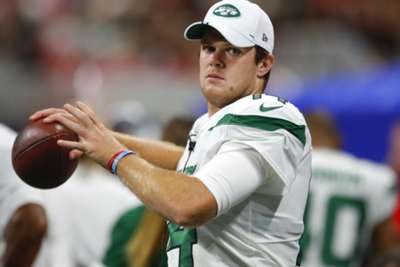 Ahead of the official kick-off of Week 2 in Carolina on Thursday, another quarterback was sidelined, but not with an injury.

Still, the NFL is searching for options in an attempt to make the game safer and decided to turn it into a contest with the hope of garnering more interest from people who could help.

New York Jets head coach Adam Gase made the shocking announcement after quarterback Sam Darnold missed practice Wednesday with an undisclosed illness believed to be strep throat. It was later reported that Trevor Siemian is expected to start Monday against the Cleveland Browns, while Luke Falk will serve as the backup.

It is clearly a cause for concern since the symptoms can last for months, though an October 6 return to face the Philadelphia Eagles is possible considering the Jets have a bye in Week 4.

Le'Veon Bell also caused worry when Gase confirmed the running back would miss practice on Thursday. Bell, however, underwent an MRI, which revealed no tears or damage to his shoulder.

It is a stretch and will depend on his recovery, but the Jacksonville Jaguars quarterback is staying positive. Nick Foles was placed on the injured reserve/return list after undergoing surgery on his broken left collarbone on Monday and is eligible to return in Week 11 against the Indianapolis Colts following Jacksonville's bye.

In the meantime, the team acquired Joshua Dobbs from the Pittsburgh Steelers to compete for playing time with Gardner Minshew, who filled in for Foles in the opener.

Guice out 6-8 weeks after surgery

The Washington Redskins running back tore the meniscus in his right knee in the team's Week 1 loss to the Eagles. Derrius Guice will need time to recover from the procedure he underwent on Thursday, in which he reportedly had his meniscus trimmed.

Guice rushed for 18 yards on 10 carries in his NFL debut. The 22-year-old's absence has pushed veteran rusher Adrian Peterson back into the starting line-up after he was deemed a healthy scratch for the first time in his career last week, so his role is expected to expand.

Odell Beckham Jr claimed current Browns players told him about Williams' tactics when he served as defensive coordinator in Cleveland from 2017-18, saying he instructed them to take him out during a preseason matchup in 2017.

Beckham ended up hurting his ankle in that game on a hit by Briean Boddy-Calhoun and later broke the same one in Week 5 of the regular season in an injury he said "changed my life forever."

The league is looking to upgrade its equipment in an effort to increase safety and reduce concussions, so it announced the "Helmet Challenge" to stimulate the development of new headgear for players that will outperform models being used today.

The 18-month contest, set to begin this fall and culminate in May 2021, will feature a prize of $2million in grant funding to support the development of a helmet prototype and a $1m award.

In the wake of the sexual assault and rape allegations against him, New England Patriots receiver Antonio Brown continued to practice — albeit in a different number than Wednesday — and catch passes from quarterback Tom Brady.

The Pro Football Hall of Fame has announced the nominees for the class of 2020.

BREAKING: The Modern-Era nominees for the Class of 2020 have been released. The list is comprised of 122 players and coaches. Among the group announced are eight first-year eligible players. Click the link to see the list https://t.co/8Az63vLDnw #PFHOF20 pic.twitter.com/xACf57JANG