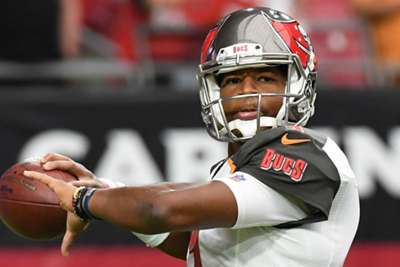 Both teams had something to prove on Thursday and the Tampa Bay Buccaneers came out on top against the Carolina Panthers 20-14.

Winston and Newton were coming off forgettable starts but only one was able to turn it around in week 2.

Winston was able to lead Tampa Bay past Carolina at Bank of America Stadium as the Panthers' winless start to the season continued.

The Bucs' defense helped shut down Newton and company, who had a chance to complete the comeback when they had the ball, trailing by six points, inside the five with time winding down. But a big defensive stop by Tampa Bay sealed the game.

Here are three takeaways from the Buccaneers' much-needed win over the Panthers.

The 'Quarterback Whisperer' finally got to Winston

Winston – the first overall pick in the 2015 draft – has underperformed after his Pro Bowl rookie season. Since joining the NFL, he has the most turnovers (79) and interceptions (61) in the NFL and is tied for the most fumbles lost (18) and his first game of the 2019 season did not look promising. He threw three interceptions while completing just over 55 per cent of his passes in last week's 31-17 loss to the San Francisco 49ers.

Normally, a quick turnaround to a Thursday night game would fatigue most players. But it seemed to do the opposite for a seemingly energised Winston.

He finished the game 16-of-25 passing for 208 yards, including a 20-yard touchdown pass to Chris Godwin.

Newton shut down by Bucs defense

Like Winston, Panthers QB Newton needed a big night. Unlike Winston, he was unable to do so against a tough Buccaneers defense.

Now how much was Newton self-sabotaging and how much was the effort of Tampa Bay, which has turned around under the leadership of Todd Bowles, is up for debate. But at the end of the night, Newton was sacked three times and had the ball punched out by the Bucs, who then recovered the fumble. He completed 25 of his 51 passes in the loss.

On its own, it could be chalked up to a poor night. But consecutive ineffective games is a troubling sign for the seemingly healthy Newton.

Did the Panthers ruin their playoff chances?

This is not a first, or second, week overreaction. Now that the Panthers are 0-2, they have a 12 per cent chance of making it to the postseason. The odds — unless they become the 2018 Houston Texans or Seattle Seahawks, who made the playoffs despite the dismal start — are not in their favour.

Both of Carolina's losses came at Bank of America Stadium, which is not ideal considering four of their next five games are on the road. If wins at home are hard to come by with a struggling Newton and Christian McCaffrey, who has yet to get going, then facing the likes of the Texans and Buccaneers (again) on their turf will be a big test for the team.