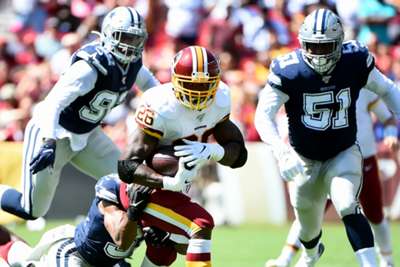 Adrian Peterson added another achievement to his glittering resume on Sunday in the Washington Redskins' game with the Dallas Cowboys.

The Washington running back scored his 107th career rushing touchdown to pass Hall of Famer Jim Brown on the all-time list.

The 34-year-old surpassed Brown in the second quarter of Sunday's game against Dallas as he found the endzone on a one-yard run.

His touchdown came after Cowboys quarterback Dak Prescott threw his first career interception against Washington. Prescott had 169 attempts in games with Washington under his belt before the pick.

Peterson was a healthy scratch for the first time in his career in the team's Week 1 loss to the Eagles.