Brees and Donald sidelined with injuries in Rams v Saints 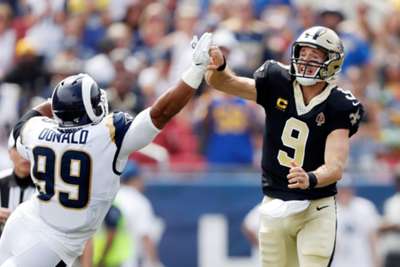 Brees appeared to suffer a thumb injury when he took a blow to his throwing hand in contact with Donald during the first quarter.

He had his hand taped and watched on from the sidelines as Teddy Bridgewater took over against the Rams, although the Saints were yet to issue an official update on Brees.

Rams star Donald, having been involved in that incident, later disappeared down the tunnel with a back complaint.

The two-time NFL Defensive Player of the Year was then listed as questionable to return by Los Angeles before returning in the second quarter.

Injury update: Aaron Donald is questionable to return with a back injury.