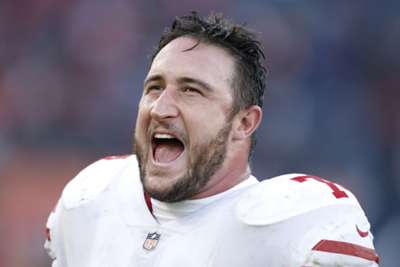 The San Francisco 49ers dominated the Cincinnati Bengals 41-17 on Sunday, but lost a key piece of their offensive line in victory.

Starting left tackle Joe Staley was carted off the field in the third quarter and coach Kyle Shanahan told reporters the six-time Pro Bowler has a broken fibula.

Shanahan said Staley would likely be out for "less than eight weeks" and probably will not be put on the injured reserve list.

"Any time you lose your left tackle it's always significant," Shanahan said. "Especially when the guy who backed [Staley] up, we lost in preseason. So, we got [Justin] Skule, we got [Daniel] Brunskill, guys who'll have to step it up.

"Unfortunate for Joe. I know how bad he wants to be out there, but once we accept the injury at least we'll still get him back later this year."

Staley, 35, has been with the 49ers since the team selected him as a first-round pick in the 2007 NFL Draft. He has made three All-Pro teams in his 12-year career.