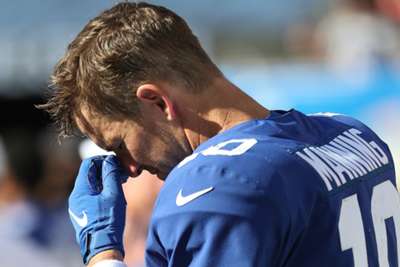 The Giants were beaten 28-14 by the Bills in Week 2 as New York's winless start to the NFL season continued.

Manning was once again inconsistence at home to the Bills, the two-time Super Bowl champion completing 26 of his 45 passes for 250 yards with a touchdown and two interceptions.

Asked about possibly replacing the 38-year-old long-time starter, Shurmur told reporters: "I think we have to look at how our team played and we have to go back and take steps to get better in all areas.

"I don't think that's a conversation for right now. Everybody has to play better."

Manning – a two-time Super Bowl MVP and four-time Pro Bowler – added: "When you're 0-2, there's pressure on everybody.

"That's just the way it goes. You can't have that affect you. You can't let that change the way you prepare, the way you play. I've got to make better throws, better decisions and find ways to convert on third downs. That's a quarterback's job."

The Giants selected Jones with the sixth pick in the 2019 draft. The move was widely criticised by fans, but the Duke product impressed in preseason, completing 29 of his 34 passes for 416 yards with two touchdowns and no interceptions.

New York are scheduled to face the Tampa Bay Buccaneers away from home in Week 3.