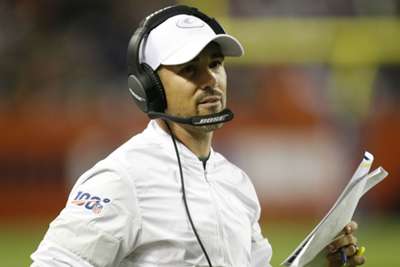 LaFleur and quarterback Rodgers were seen arguing on the sidelines late in the first half of Green Bay's 21-16 win over the Minnesota Vikings on Sunday.

But, LaFleur said after the game he was not concerned about the incident.

"That's just two competitive guys, and I'm sure it's not going to be the last one we have," LaFleur said, via ESPN.

"But you know, just competitors, heat of the moment and it is what it is. I would much rather have that than anything else because you want guys that are extreme competitors, and that's what he is."

Rodgers also told reporters he was not worried about the exchange.

"It was about the look on defense," Rodgers said. "I was actually kind of surprised that he was coming over to talk about that, but we got it all sorted out over there on the sideline. It actually wasn't a big deal.

"We're a little animated at times. I can't say we were yelling how much we love each other, but we definitely weren't [cursing at] each other or anything. It was talking about the look there and getting on the same page."

The Packers have been inconsistent on offense under LaFleur but improved to 2-0 this season with the victory over Minnesota.

Rodgers completed 22 of his 34 passes for 209 yards with two touchdowns in the game.

The Packers are set to host the Denver Broncos in Week 3.