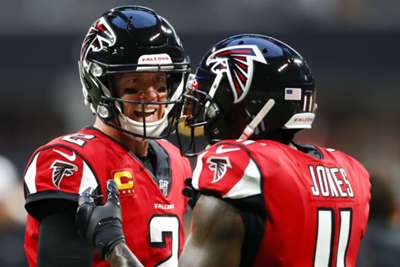 The Atlanta Falcons left it late to overcome the Philadelphia Eagles 24-20 in the NFL on Sunday.

The ugly encounter featured six turnovers and a slew of injuries on both sides before the Falcons came away with a victory thanks to a late Julio Jones touchdown.

Now, both the Falcons and Eagles are 1-1.

Three takeaways from the Falcons' home win over the Eagles

While Matt Ryan led his team to victory, it was each of the defenses that stole the show at Mercedes-Benz Stadium.

From the secondary to the defensive line, each unit was giving the quarterbacks a tough time. And again, when the game was on the line in the final minutes, it was the defense that delivered.

It started with two interceptions by Falcons' seventh-year cornerback Desmond Trufant, who went all last season without a single pick.

And then ended with a big stop from Atlanta on fourth down.

In the final 30 seconds, Zach Ertz was stopped a yard shy of a first down on Atlanta's 16-yard line by the duo of Keanu Neal and Isaiah Oliver.

The oft-injured quarterback had another scare.

Wentz was replaced in favour of Josh McCown after taking a hit to the midsection. However, reports later indicated Wentz was being evaluated for a concussion.

When he did return, he slowly got back to form and was seemingly fine, making a number of impressive throws throughout the remainder of the game.

Wentz finished 25-of-43 passing for 231 yards with one touchdown and the two interceptions.

How hot is Dan Quinn's seat?

The fifth-year head coach has denied he is in the hot seat. But Dan Quinn's track record entering Sunday's game begged to differ.

He said there was no added pressure to win but after losing 11 of his past 18 games dating back to the 2017 playoffs, Quinn needed this win as much as the team did for their own morale.

Quinn chose a gutsy play call on fourth-and-three at the Falcons' own 46-yard line that led to the go-ahead touchdown to secure Atlanta's first win of the season.

THE BEST RECEIVER ON THE PLANET.

It seems his seat may be a little cooler for the time being.