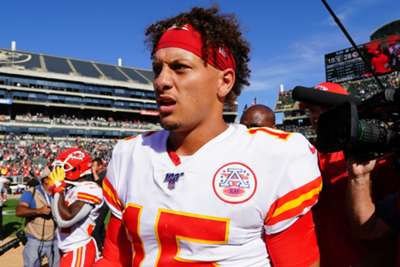 Andy Reid insisted he never takes Patrick Mahomes for granted despite the quarterback producing another stunning performance for the Kansas City Chiefs.

The Chiefs appeared in a spot of trouble on the road when they fell 10-0 behind to the Oakland Raiders on Sunday, only to bounce back from a slow start on offense to score 28 unanswered points in the second quarter.

Mahomes threw four touchdown passes before the end of the first half, two of them to Demarcus Robinson, as Kansas City overwhelmed their hosts despite the absence of leading receiver Tyreek Hill through injury.

The reigning NFL MVP had 278 yards during the stunning 15-minute spell of offense, the most in a quarter since Drew Brees had 294 in November 2008.

"I never take it for granted," Reid said of Mahomes in his post-game press conference.

"Some of these throws he makes, we just buzz right through like it happens every day. It kind of does happen every day. That's what makes him unique.

"The fact he's willing to work on his game the way he does is also very important.

"In this league, if you let off an inch, you're going to fall. He stays right on top of that in everything he does."

Reid was particularly pleased with the way the Chiefs hit back from a double-digit deficit, keeping the Raiders at bay in a scoreless second half.

"I'm proud of our guys - we were down by 10 points, so for everybody to rally and come back was a big step," he told the media.

"We grew a little bit today."

The Chiefs return home for Week 3, as they take on the Baltimore Ravens in a battle between teams with 2-0 records at the start of the new NFL season.