Browns´ Chris Smith to play against Jets after death of girlfriend 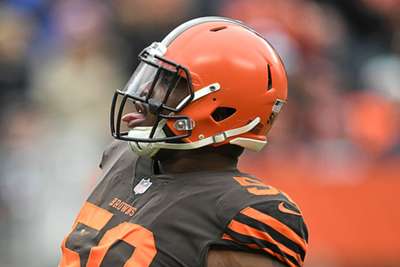 Cleveland Browns defensive end Chris Smith has decided to play against the New York Jets on Monday despite still grieving the death of his girlfriend.

Petara Cordero died last Wednesday, less than a month after she gave birth to the couple's daughter, after being struck by a car.

The Browns offered Smith support in a statement last week and said he would "receive the full team's support of resources and will have the opportunity to grieve as he sees best fit".

Smith was offered the opportunity to be excused from team activities but said Cordero would have wanted him to play and that he was suiting up in her honour.

"I am going to play tonight because it is something she would want me to do," Smith said in a statement published by cleveland.com on Monday.

"She would want me to keep doing what I love and stay strong. I play for her tonight. She is my why."

Smith, 27, was driving with Cordero, 26, outside of Cleveland last week when a tyre of his Lamborghini blew out, causing the vehicle to crash off the side of the road. Cordero got out of the vehicle but was hit by an oncoming car.

Smith returned to practice on Saturday, having paid a touching tribute to Cordero on social media.

"God has a plan for all of us we can't understand but she is in a better place now and she can rest easy," Smith wrote on Instagram. "My wifey, my best friend and the mother of my beautiful daughter. Love you baby."