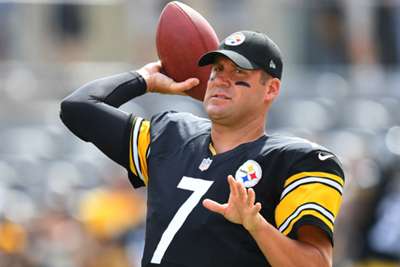 Ben Roethlisberger has outlined a desire to return to "championship-level play" for the Pittsburgh Steelers following a season-ending injury.

Quarterback Roethlisberger has previously hinted at the possibility of retiring from the sport in the near future but committed to the Steelers through to the end of the 2021 campaign with a new deal in the offseason.

However, the 37-year-old was ruled out of the remainder of the 2019 season on Monday as coach Mike Tomlin revealed he would require elbow surgery.

Roethlisberger, who has won two Super Bowls with Pittsburgh, suffered the injury in Sunday's loss to the Seattle Seahawks.

Roethlisberger's absence deals another blow to the Steelers, who are 0-2 through two weeks, having seen key men Antonio Brown and Le'Veon Bell leave the team.

But veteran Roethlisberger released a statement in which he suggested he felt he had let the team down and promised to work to return to form and fitness.

"I've been informed that I need season-ending surgery on my elbow to continue playing football at the level I expect," it read.

"This is shocking and heartbreaking for me, to miss this much of a season and feel like I am letting down so many people.

Ben Roethlisberger has released a statement regarding his season-ending injury.

"I can only trust God's plan, but I am completely determined to battle through this challenge and come back stronger than ever next season.

"The Steelers committed three years to me this offseason and I fully intend to honour my contract and reward them with championship-level play.

"I will do all I can to support Mason [Rudolph] and the team this season to help win games.

"I love this game, my team-mates, the Steelers organisation and fans, and I feel in my heart I have a lot left to give."

Backup Rudolph started the second half against the Seahawks following Roethlisberger's injury.

The Steelers were at least boosted by news of James Conner's fitness.

The running back, who missed three games last season with an ankle ailment, left the Seattle defeat with a knee problem but told 93.7 The Fan he had suffered no significant damage.