NFL news and notes: Brees out for six weeks, Roethlisberger done for season 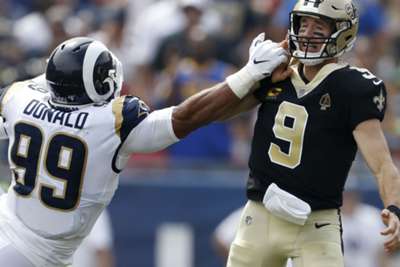 Ahead of Monday's Cleveland Browns-New York Jets matchup to cap the second week of action, Week 3 is already coming into focus, and it is all about quarterbacks.

Meanwhile, there has been another development regarding Antonio Brown.

The New Orleans Saints quarterback left Sunday's loss to the Los Angeles Rams early and was seen on the sidelines with his hand taped. It was later reported he will need surgery to repair a torn ligament in his throwing thumb and could be out until November as he recovers.

Coach Sean Payton confirmed on a Monday conference call that Brees, who has missed just one game due to injury in his 13-year NFL career, will get a second opinion but Teddy Bridgewater is still expected to take over as the starter.

He finished Sunday 17 of 30 for 165 yards with no touchdowns in place of Brees.

Ben Roethlisberger out for season with elbow injury

It is a blow for the Pittsburgh Steelers after the team finally got over their 2018 drama. Roethlisberger was seen shaking his throwing arm in Sunday's loss to the Seattle Seahawks before being benched in the second half with an elbow injury. Coach Mike Tomlin confirmed an MRI later revealed the severity of the damage, which will require season-ending surgery.

Mason Rudolph is set to take over as the starter in place of Roethlisberger, who will be missing in action due to injury for the first time since Week 7 of the 2016 season, but the team seem to have faith in the second-year quarterback after he went 12 of 19 for 112 yards, two touchdowns and a pick on Sunday.

Britney Taylor, Brown's former trainer, last week filed a civil lawsuit against him in Florida, claiming he sexually assaulted her three times over two years, allegedly raping her in 2018.

Brown denied the allegations, while the NFL opened its own investigation.

On Monday, Sports Illustrated ran a story from a second woman, who came forward on the condition of anonymity, but Brown has also denied the latest accusation.

Giants hint at possibility of change at QB

As the New York Giants find themselves in an 0-2 hole thanks to veteran Eli Manning, coach Pat Shurmur was asked if he will remain the starter against the Tampa Bay Buccaneers.

"He's been our starter to this point," Shurmur told reporters. "I'm not ready to talk about that."

Pat Shurmur’s response to being asked if he’s ready to make the switch from Eli Manning to Daniel Jones:
pic.twitter.com/A4CfQaJNBO

Daniel Jones, selected sixth overall in April, gave the Giants reason to believe in their backup with his strong performance during the preseason and will keep warm as he waits on his call if Manning's inconsistencies continue.

The defensive end took to Twitter to ask Dallas to "free" him. The initial tweet was eventually deleted and Charlton later wrote the move was "the last thing I want to do".

Trust me the last thing I want to do is to have to go to social media to get what I want so I can play football again.

It was reported on Sunday that the Cowboys had "recent trade talks" about Charlton, who had asked to be traded this offseason. It looks like those discussions could heat up again as early as this week.

Eddy Pineiro's foot saved the day in Chicago, and it was exciting no matter which broadcast you heard.

Browns defensive end Chris Smith dedicated his performance on Monday against the Jets to his late girlfriend, Petara Cordero. She died last week after she was struck by a vehicle, just weeks after she gave birth to their first child.