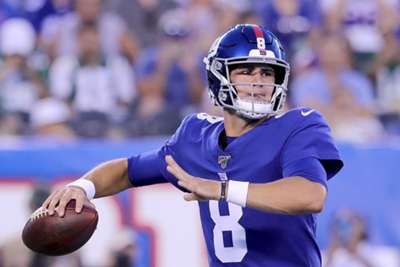 The Eli Manning era in New York appears to be over after the Giants announced they will start Daniel Jones in Week 3 at the Tampa Bay Buccaneers.

Following a hint from head coach Pat Shurmur on Monday, the move at quarterback was confirmed in a team statement after two inconsistent starts by Manning that have left the Giants in an 0-2 hole.

"Eli and I spoke this morning," Shurmur said in Tuesday's release.

"I told him that we are making a change and going with Daniel as the starter. I also talked to Daniel.

"Eli was obviously disappointed, as you would expect, but he said he would be what he has always been, a good team-mate, and continue to prepare to help this team win games. Daniel understands the challenge at hand, and he will be ready to play on Sunday.

"Ultimately, this is a move that I felt was best for this team at this time. I have said it since I got here, I am very fond of Eli. His work ethic, his preparation, his football intelligence.

"All those attributes are as good as I have ever seen in a player and Eli worked as hard as you could ask of anybody to get ready for this season.

"This move is more about Daniel moving forward than about Eli.”

Jones, selected sixth overall in April, gave the Giants reason to believe in their backup with his strong performances during the preseason as he completed 29 of his 34 passes for 416 yards with two touchdowns and no interceptions.

Meanwhile, Manning has thrown for 556 yards, two touchdowns and two interceptions in the first two games, defeats to the Dallas Cowboys and Buffalo Bills.