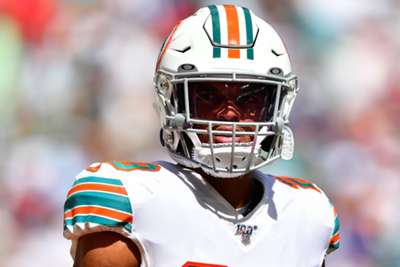 The Dolphins and Steelers find themselves in similar situations to start the 2019 season: in an 0-2 hole without a franchise quarterback.

In the wake of Ben Roethlisberger's season-ending elbow injury, which elevated second-year backup Mason Rudolph to the starting role, Pittsburgh acquired disgruntled defensive back Minkah Fitzpatrick from Miami to pad its secondary. (The Steelers also got a fourth-round pick in 2020 and a seventh-round pick in 2021.)

The Dolphins received a first-round pick in next year's draft in addition to a 2020 fifth-rounder and a 2021 sixth-rounder in the deal to bolster their inevitable rebuild.

But what exactly is the plan for the Dolphins? And why would the Steelers be willing to trade a valuable draft selection to save a season that's seemingly gone down the drain already?

Let's start in Miami, where the Dolphins have been outscored by a whopping 92 points through their first two games this season. While there's got to be a light at the end of the tunnel, it's more a question of how long it will take to get there.

The Dolphins now have five first-round picks in the next two drafts, including three first-rounders in the 2020 draft, hardly dispelling the notion they are tanking to better their draft position. With this season seemingly already lost, the Dolphins may look to take further advantage of their downward spiral but still wait until 2021 to make a move under center.

Then again, there's only so much the team can take with journeyman Ryan Fitzpatrick at the helm. He has a plausibly reliable backup in second-year quarterback Josh Rosen, the former 10th overall pick who saw limited action in Arizona before being replaced by rookie Kyler Murray.

We have acquired DB Minkah Fitzpatrick and draft picks from the Dolphins in exchange for draft picks.@BordasLaw TRANSACTION: https://t.co/Fwnpe5GVI1 pic.twitter.com/TGw3qPlfBZ

But Miami's moves point beyond just high draft picks. By offloading left tackle Laremy Tunsil, receiver Kenny Stills and linebacker Kiko Alonso before they dealt Fitzpatrick this week, the Dolphins shed a lot of salary. Miami are on course to have over $100million in cap space for 2020, it's a significant play to a hopefully brighter future.

Which brings us to Pittsburgh, where Roethlisberger has vowed to "come back stronger than ever next season" after undergoing surgery.

The 37-year-old is unlikely to stay with the Steelers beyond the two-year contract extension he signed in the offseason, so the team will need a successor soon.

Rudolph may be up for the challenge and impressed in relief of Roethlisberger against the Seattle Seahawks. The Steelers now have the luxury of a season-long look at Rudolph in the starring role. Still, Roethlisberger's injury is evidence that situations can change in an instant, which could prompt Pittsburgh to also look closely at the 2021 draft for the next face of its franchise.

The Steelers contending with Rudolph under center is not out of the question if offensive weapons Vance McDonald, James Conner and JuJu Smith-Schuster can stay healthy.

However, if the offense is unable to produce to a satisfactory level, then adding a defensive back like 22-year-old Fitzpatrick, the 11th pick in the 2018 draft, can help the defense take ove the team narrative and carry the load.

It's too early in the season to tell whether the respective strategies of the Dolphins and Steelers will pay off, but we have a good idea of the direction each team is headed.