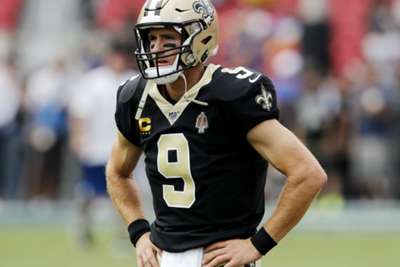 Drew Brees should be back on the field by mid-November after the New Orleans Saints quarterback required thumb surgery.

Saints coach Sean Payton said he does not plan to place the Brees on injured reserve, an indication the team is hopeful he can return within eight weeks after being given an initial six-week recovery timeline.

Payton confirmed Brees is set to have a thumb operation on Wednesday but did not give a definitive date for his return.

Brees later shared a photo of himself and his wife, Brittany, before heading to his procedure.

Heading into surgery with this beautiful gal by my side. This is what she gets to do on her birthday today! I love you Brittany. More and more everyday!

Payton revealed he will not announce the starting quarterback before Sunday's game against the Seattle Seahawks. Instead, he will approach Week 3 with both Teddy Bridgewater and Taysom Hill as options under center.

Bridgewater had filled in for Brees after he was sidelined early on Sunday against the Los Angeles Rams, finishing 17-for-30 for 165 yards with no touchdowns.

Brees said after the game he originally hurt his thumb on a pass attempt to Jared Cook before later hitting it on Rams defensive tackle Aaron Donald. It was later confirmed he sustained a torn ligament after seeing two specialists in Los Angeles and Houston.

The 40-year-old is expected to miss matchups against the Seahawks, the Dallas Cowboys, the Tampa Bay Buccaneers, the Jacksonville Jaguars, the Chicago Bears and the Arizona Cardinals but could return against the Atlanta Falcons following the team's Week 9 bye.