That´s what he said: 10 best NFL quotes from Week 6 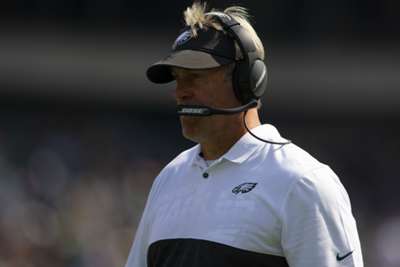 From post-game news conferences to next-day media availabilities, here are the 10 best Week 6 quotes from players and coaches around the NFL:

— Atlanta Falcons head coach Dan Quinn stressed the importance of his team taking advantage of their next two home games to get back on track: "I'd say more than anything, we get a chance to fight in front of our home fans. There's no moral victories, there's no things of that such other than finding our ways to fight to get our football team the wins that we need to get. That's really all we’ll think about and all we'll focus our time on."

— Philadelphia Eagles coach Doug Pederson on next week's NFC East showdown with the Dallas Cowboys: "Anytime Dallas loses it helps, because here's the thing — I know the sky is falling outside. … Has it been perfect or beautiful or all of that? No. But all we need to do is try to be 1-0 this week, beat the Dallas Cowboys, we're in first place."

— Not only were the Los Angeles Chargers embarrassed on "Sunday Night Football," Pittsburgh Steelers fans also took over their stadium, and the team were not happy: "I don't know what that was. Don't do that at our own stadium," Melvin Gordon said after the game. "It already felt like it was their stadium … I don't understand that."

— Detroit Lions safety Tracy Walker had some harsh words for the officiating crew after the team's Monday loss to the Green Bay Packers: "Extremely pissed off right now," Walker said. "It is what it is. Disappointed. Hurt. We had that game."

— Packers kicker Mason Crosby on his first Lambeau Leap after sealing his team's win: "That was special. It's something I've always wanted to do."

— Cowboys owner Jerry Jones spoke candidly about coach Jason Garrett on 105.3 The Fan radio: "If I totally disagreed with [Jason] Garrett's philosophy, he wouldn't be the head coach."

— Carolina Panthers coach Ron Rivera gave a sincere injury update on quarterback Cam Newton: "I think people need to understand that the young man has done everything we've asked. I'm trying to stay true to what I told him. We're not going to put that kind of pressure on him. So, until we have it confirmed with our doctors and stuff like that, we're going to continue to do what we're doing."

— Jay Gruden on life after being fired by Washington Redskins: "Pretty quiet ... Bored out of my mind."

— NFL competition committee chairman Rich McKay declined to discuss whether pass interference replay is really working this season:  "I don't think we would give a summation of whether a rule that's been in place for six weeks is working or not working," McKay told reporters. "We want to get the egregious ones, and we want to get them overturned."

— Less than a week after leaving the door open for a potential NFL return, Rob Gronkowski appears to have shut it again: "I'll give an answer. When I retired, I retired for a reason: because I needed to step away," Gronkowski said. "So it would be a no. There it is."