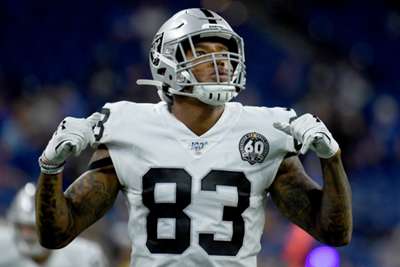 Darren Waller, one of the breakout stars for the Oakland Raiders in 2019, has signed a multi-year contract extension with the franchise.

The tight end, who was set to be a restricted free agent this offseason, is expected to make around $9million a year, according to NFL Network.

His new deal was confirmed by the Raiders in an official statement.

"Raider Nation, I'm going to give you all I got," said Waller in a video on Oakland's official website.

"I'm just appreciative to be here for a few more years. I really can't put it into words."

Darren Waller's message to #RaiderNation comes from the heart. pic.twitter.com/q3jzP1AXSx

The 27-year-old is in the midst of a career year this season, with 37 catches and 359 yards. In his previous three seasons with Oakland and the Baltimore Ravens, the Georgia Tech product had a combined total of 18 catches, 178 yards and two touchdowns.

Waller was originally drafted by the Ravens in the sixth round (204th overall) of the 2015 NFL Draft. Oakland signed him from Baltimore's practice squad ahead of Week 13 in 2018.