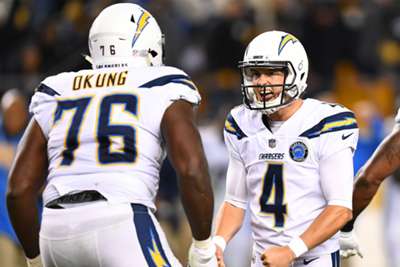 Jalen Ramsey is on the Los Angeles Rams' roster, but we have no idea if he will play this week or not.

All that and more in this edition of NFL news and notes.

Los Angeles acquired star cornerback Ramsey from the Jacksonville Jaguars for their 2020 and 2021 first-round picks in addition to a 2021 fourth-round pick on Wednesday, but Rams head coach Sean McVay might not want to put the team's newest addition to work right away.

"The goal is to be able to do that, but we'll be smart about it," McVay told reporters. "I think that we definitely want to have the intent to get him ready to go and we'll always make smart decisions. But, yes, that's the goal."

Ramsey has missed the last three games with a back injury, though some reports suggest it was a ploy to get the Jaguars to give into his trade request.

"I hope so. We'll see," Ramsey said when asked Wednesday at his introductory press conference if he'll make his Rams debut Sunday in Atlanta. "I've been missing football, I love football, so I would love that, but at the end of the day, we do have to be smart."

Chargers could get boost with Okung return

The Los Angeles Chargers have struggled with injuries this season, but the star offensive tackle could give the team the confidence they need entering a crucial matchup against the Tennessee Titans.

"I've been looking forward to this day for several weeks and I'm excited to officially announce that I will be back to football as early as Week 7," Russell Okung said.

Okung revealed he experienced "unusual chest pain at practice" on June 1 and decided to visit urgent care, where it was revealed he suffered a pulmonary embolism, a serious condition in which a blood clot gets lodged in an artery in the lung. He was told by doctors that the decision to seek treatment likely saved his life.

He has not played in months, but apparently is ready to make his comeback.

The New York Jets already got a boost with Sam Darnold back, and more help could be on the way. Jets linebacker C.J. Mosley will be back on the field for the first time since Week 1, giving optimism that he could be available to play against the New England Patriots on Monday. Jets coach Adam Gase added there is hope Mosley will do more in Friday and Saturday's practices to ensure he will be ready to go.

Mosley has been dealing with a groin injury, but New York have opted to take a more cautious approach with one of their best defensive players early in the season.

Veteran Baltimore Ravens safety Earl Thomas did not exactly leave the Seattle Seahawks on the best terms, but the two sides appear to have put their differences aside to share a mutual respect.

"Earl was a great football player for us in the years he was here. We loved what he did — his uniqueness and his style of play," Seahawks coach Pete Carroll told reporters on Thursday. "The way he practiced and his focus was somewhat unmatchable. We just couldn't stay together forever, you know. Couldn't figure out how to do that. But wish him the best and looking forward to [Sunday].

A.J. Green still has "a little ways to go" in rehab

The Cincinnati Bengals receiver has struggled to get healthy since suffering an ankle injury early in training camp and undergoing surgery in late July but told reporters he is progressing with the injury.

Cincinnati will host the Jaguars in Week 7, a game A.J. Green is unlikely to play, then head overseas to play the Rams in London before the team's Week 9 bye. It is possible Green could return in Week 10 against the Ravens, assuming the Bengals do not deal him before the October 29 trade deadline.

It is Philadelphia Eagles-Dallas Cowboys week, and Stephen A. Smith is FIRED up.

.@stephenasmith is talking trash about the receivers in Philly and no one could hold it together pic.twitter.com/qtnrZN5ilq

Former Denver Broncos linebacker DeMarcus Ware is pumped for Patrick Mahomes and the Kansas City Chiefs to visit on Thursday.