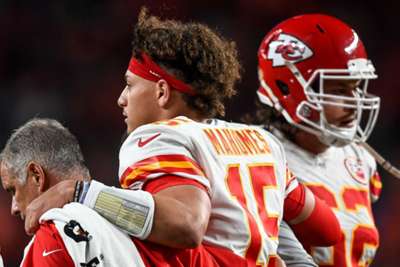 Kansas City Chiefs quarterback Patrick Mahomes provided a positive early update on the knee injury which forced him out of his team's win over the Denver Broncos on Thursday night.

The reigning NFL MVP is thought to have dislocated his kneecap on a quarterback sneak in the second quarter of the Chiefs' 30-6 victory over the Broncos.

Mahomes was helped off the field after the fourth-down play and did not return to the game as backup Matt Moore filled in for a Chiefs team that improved to 5-2 with the win.

Shortly after the game, Mahomes posted on Twitter: "Awesome team win! Love my brothers! Thank you for all the prayers! Everything looking good so far!"

Awesome team win! Love my brothers! Thank you for all the prayers! Everything looking good so far! #GodisGood #ChiefsKingdom

Reports suggest Mahomes will undergo an MRI on Friday to determine whether there is any ligament damage.

"His knee didn't even look like a knee," tight end Travis Kelce said in quotes published on ESPN. "It was all out of whack. I couldn't even describe it."

Mahomes has been battling an ankle problem in recent weeks, which made the play call on fourth down even more curious, yet Chiefs head coach Andy Reid defended the decision to use his star quarterback in such a way.

"Not too many people get hurt on a sneak," Reid argued. "It's a freak thing and it happens."