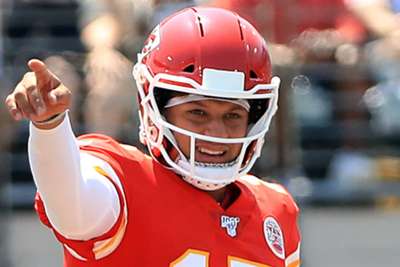 Patrick Mahomes has avoided significant damage despite dislocating his kneecap while in action for the Kansas City Chiefs on Thursday, according to reports.

Mahomes was taken off in the first half of the Chiefs' win over the Denver Broncos, having appeared to have his right knee popped back into place while still on the field.

The quarterback was set to undergo MRI scans on Friday, and the NFL Network later reported the 24-year-old had suffered no additional damage.

It was said Kansas City plan to have reigning NFL MVP Mahomes back on the field this season.

ESPN reported Mahomes could even be back in around three weeks in a best-case scenario.

Mahomes, who had been playing through an ankle problem, was able to leave the field without a cart and will now be aiming to lead the Chiefs in the playoffs.

The team are 5-2 through seven weeks, returning to winning ways on Thursday following back-to-back defeats to the Indianapolis Colts and Houston Texans.

He threw 50 touchdowns in the 2018 regular season and had added another 15 this term before backup Matt Moore was required to step in against the Broncos.