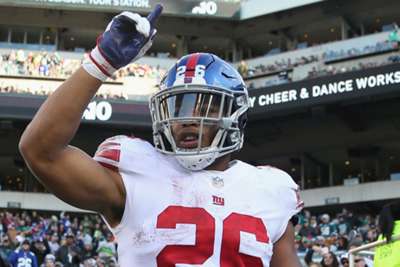 Saquon Barkley is available to face the Arizona Cardinals on Sunday, New York Giants coach Pat Shurmur confirmed to the media on Friday.

Running back Barkley has missed three games with an ankle injury but was a full participant in Wednesday's practice session, raising hopes of a return.

The 22-year-old suffered an ankle sprain in the first half of the Giants' Week 3 win over the Tampa Bay Buccaneers and was initially thought to be out for between four and eight weeks.

Barkley rushed for team-high 227 yards, second in the NFL at the time, and had one rushing touchdown in two games at the start of the season.

However, he returned to practice on a limited basis last week and, while not cleared for the 35-14 loss to the New England Patriots, could feature against the Cardinals (2-3-1).

"He's available," Shurmur told reporters. "We'll see if he's back. If he is, he'll be ready to go. I just choose not to tell you right now."

The Giants (2-4) could also welcome back tight end Evan Engram and Barkley's fellow running back Wayne Gallman, with the duo also practicing fully on Friday.

However, wide receiver Sterling Shepard remains sidelined due to concussion and has been ruled out for Week 7.