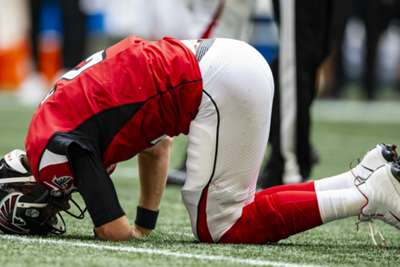 The beleaguered Atlanta Falcons suffered a fresh blow on Sunday when quarterback Matt Ryan injured his ankle in the defeat to the Los Angeles Rams.

Ryan went down early in the fourth quarter of the team's 37-10 loss after getting sacked by Aaron Donald.

He walked off the field under his own power and was tended to by trainers in the locker room.

The Falcons later announced he suffered an ankle injury and would not return to the game.

According to ESPN, Ryan was later seen in the Falcons' locker room wearing a walking boot on his right foot.

Before suffering the ankle injury, the 2016 NFL MVP had completed 16 of 27 passes for 159 yards, no touchdowns and one interception.

The 34-year-old becomes the third quarterback in the NFC South division to go down with an injury after Drew Brees of the New Orleans Saints and Cam Newton of the Carolina Panthers suffered injuries in Week 2.

The Falcons host the Seattle Seahawks in Week 8.