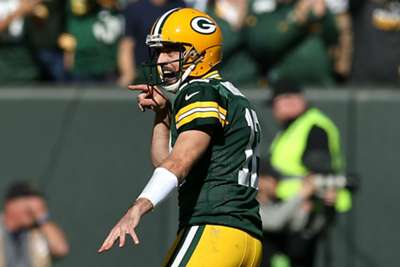 Aaron Rodgers is a cheat code after the Green Bay Packers quarterback put up Madden-like numbers in Sunday's 42-24 NFL win over the Oakland Raiders.

Rodgers finished 25-for-31 passing for 429 yards, five touchdowns and a perfect 158.3 rating, while the Packers star also had one rushing touchdown.

His performance, which helped push Green Bay to 6-1 for the season, put him in elite company. Rodgers registered his fifth career game with five-plus scoring passes, joining just six other quarterbacks to perform that feat, including Drew Brees (10), Peyton Manning (nine) and Tom Brady (six).

It was arguably the best game of his career.

Meanwhile, the San Francisco 49ers remain undefeated thanks to a 9-0 win over the lowly Washington Redskins.

It was messy and wet, very wet, but San Francisco were able to go on the road and keep their perfect streak alive. It is the first time the 49ers have started 6-0 since 1990 and while they did not put up many points, it was another good defensive outing. They have allowed just three, seven and zero points in their last three respective games.

Across the league, Earl Thomas returned to Seattle for the first time as a Baltimore Ravens player and helped the defense make a big stand in a hostile environment. They went on to beat the Seahawks 30-16 after two defensive scores.

The Atlanta Falcons continue to sputter after a 37-10 loss to the Los Angeles Rams that saw Devonta Freeman ejected for picking a fight with Aaron Donald and quarterback Matt Ryan limp off the field after taking his fifth sack in the fourth quarter.

Houston Texans wide receiver Will Fuller was ruled out against the Indianapolis Colts with a hamstring injury.

Ito Smith was carted off the field with both head and neck injuries. The Falcons running back did not return to the game versus the Rams.

Adam Thielen left the Minnesota Vikings matchup with the Detroit Lions. The receiver suffered a hamstring injury. He said after the game he will get an MRI but is optimistic he will play Thursday against the Redskins.

Deshaun Watson joined Carolina Panthers quarterback Cam Newton as the only other player in the Super Bowl era to record 7,500-plus pass yards and 1,000-plus rush yards in their first 30 career games.

There seems to be no immediate coaching change in Atlanta's future. Falcons owner Arthur Blank discussed the matter during half-time of the eventual loss to push the team to 1-6: "I don't have any specific timetable, just looking at each game one at a time. It's the bye week, yes, but it's not a trigger for making any changes. We'll just continue to look at what we see developing."

The Bengals have yet to win a game this season. They also have yet to see receiver A.J. Green on the field after he sustained an ankle injury during the team's first practice. The 0-7 skid, however, will not affect his return: "Everybody knows what type of guy I am. I'm not going to fake anything. I'm not going to milk anything. When I'm ready to play, you know it's time for me to go. It doesn't matter what the record [is]. Nobody can hold me back when it's time to play."

Watson has provided some incredible insight at the podium as of late. After the Texans' 30-23 loss to the Colts, he talked about a questionable call. Watson was sacked and ruled down on what would have been a touchdown: "He said that I was down. I don't — If you watch the tape of all the plays that I extend and make plays, especially in the red zone. I mean. He said he was trying to protect my health, so, it goes back and forth. But hey, that's the call he made. We have to live with it."